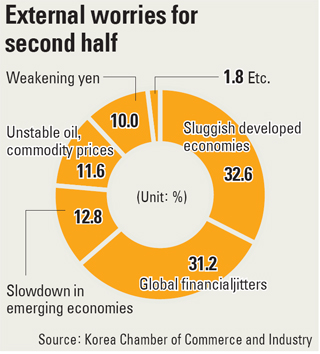 Nine out of 10 companies said the economy isn’t showing signs of recovery, according to a survey of 500 companies nationwide, according to the Korea Chamber of Commerce and Industry (KCCI) yesterday.

In the survey of both domestic and external conditions, 87 percent of the companies said they are not feeling any recovery in the economy.

In addition, companies predicted that the economic situation for the entire year will fall short of earlier expectations, with sluggish domestic demand and limp exports.

When asked how the companies rate the economic situation so far this year, the average score was 70.5 points out of 100.

The view fluctuated by industry. The automobile industry received a score of 80.3 points; textiles, apparel and footwear got 80 points; food, beverage and household goods 66.3 points; shipbuilding and industrial plants 76.3 points; steel and metal 74.5 points; and rubber, paper and plastic 70.5 points.

More than half of the companies (53.0 percent) intend to cut costs and improve productivity.

Very few companies said they would combat the floundering economy by entering new markets abroad (8.6 percent) or through mergers and acquisitions or alliances with other companies (1.5 percent).

“Due to the internal and external factors for economic uncertainties such as sluggish domestic demand, concerns over reduced quantitative easing [in the U.S.] and slowing growth in China, it seems that business conditions in the second half will not be easy,” said Jeon Su-bong, general manager of the research division at KCCI.