Acquisition tax can be a local lifeline

Acquisition tax can be a local lifeline 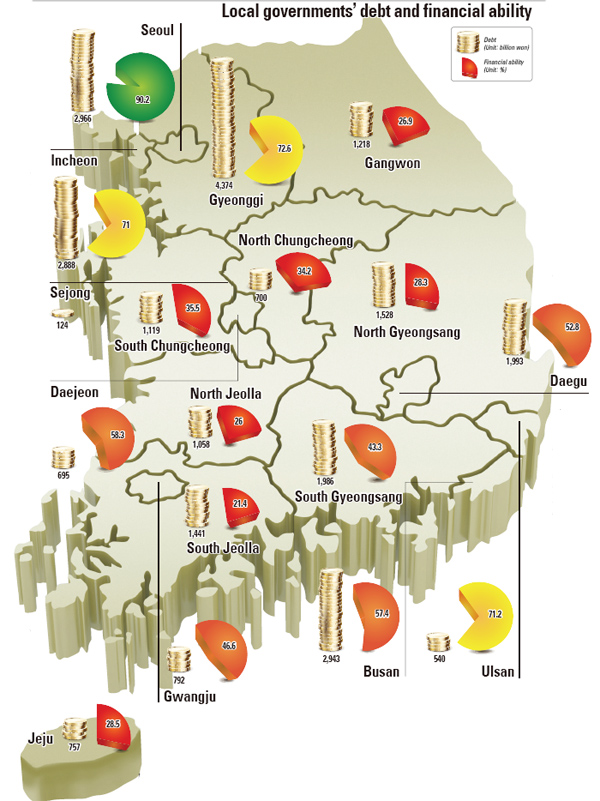 A particular real estate tax has become a hot potato these days, not only in the housing market but also in political circles.

The day after the government announced its intention to cut real estate acquisition tax rates, possibly permanently, governors of local governments and mayors of major cities gathered Tuesday to express their opposition.

“The acquisition tax is the most important source of tax revenue for local governments,” said Kim Kwang-yong, governor of North Gyeongsang at the press conference. “Reducing the tax rates would threaten the fundamentals of local governments.”

“Home purchases are made based on consumers’ need to live in or make investments, not as a result of the government’s adjustment of acquisition tax rates,” Park said. “The policy has only had an effect in hurrying or delaying the time consumers take to sell or buy.”

The 10 governors and mayors also voiced concern that cutting the tax rate would only make consumers put off their housing purchases until it takes effect in September. 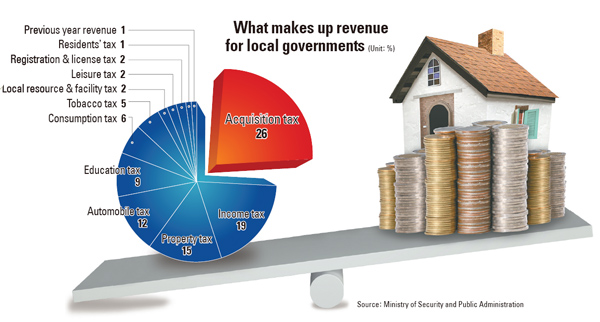 Since they are determined to block acquisition tax cut legislation, the political confrontation is expected to unfold further

The on and off acquisition tax cut is on again as the government finally made up its mind Monday to cut rates for a yet-to-be-determined period to revive a housing market that has deteriorated since a temporary 50 percent cut ended last month.

It was the first time the government has directly addressed the issue.

The acquisition tax is considered an effective tool to regulate the housing market, since the tax rates determine how much consumers must pay in a transaction. 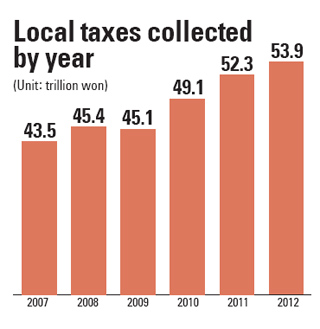 Many experts and consumers have wanted the acquisition tax cut, which expired on June 30, to be resurrected. But the government had staunchly maintained its stance that there would be no tax cut extension, because the acquisition tax is a major source of revenue for the provincial governments.

Acquisition tax revenue accounts for an average of 26 percent of the annual tax revenue of local governments throughout the country, according to the Ministry of Security and Public Administration.

However, the Ministry of Strategy and Finance, Ministry of Land, Infrastructure and Transport, and Ministry of Security and Public Administration announced Monday that they are considering a plausible measure to reduce current tax rates. The rate reduction could be as large as 50 percent.

The ministries also are considering ways to adjust the standard home price for taxation and to apply a lower rate to owners of one house than those with many properties.

One possible scenario suggested by the Security Ministry is to lower the standard from the current 900 million won ceiling for the lower rate to 300 million won.

Since the country’s 244 local governments and related agencies, including local public corporations, are struggling with mounting debt, the expected reduction in the acquisition tax will add to their burden.

Total public debt reached nearly 100 trillion won earlier this year, increasing concerns about the possibility of a local-entity bankruptcy. News of the U.S. city of Detroit’s bankruptcy this week is unlikely to allay those concerns.

Would the acquisition tax cut really be effective in revitalizing a housing market that has been moribund for the past five years?

One way to make up shortfalls incurred by a reduction in the acquisition tax would be to raise the general property tax.

Kim Sang-kyum, professor at Dankook University, criticizes such a measure as contradictory.

“The whole point of cutting the acquisition tax rates is to boost transactions, but raising the property tax will encourage people to buy or sell houses,” Kim said. “A main cause of the stagnant housing market is consumers avoiding ownership.”

Owning a house would costs more than the expected capital gains these days, the professor added.

The current trend of sale prices of houses continuing to fall at the same time two-year lease fees are going up bolsters Kim’s argument.

“People feel burdened by buying a house, even if they need one,” he said.

A hike in the property tax would only increase costs for homeowners, inviting a further contraction in home sales, Kim said.

“The central government should adjust national taxes rather than local taxes to address such a national issue,” he said. “Some government branches regard local governments’ financial situations as a local matter, which is totally wrong.”

Kim argued that if the government wants to use the acquisition tax as part of its national real estate policy, it should amend the Constitution so the central government shares income tax and consumption tax revenues with local governments, as Germany does.

Others say local government leaders are missing the point.

“Local governments shouldn’t whine, because their tax revenue is falling because of the severe recession in the real estate market, not because of cutting the rate,” said Lee Chang-moo, a professor at Hanyang University. “The acquisition tax cannot be a secure source of revenue for them. They have to make this crisis an opportunity to discover their own financial sources.”

Nonetheless, for the time being local governments depend on the acquisition tax.

“The acquisition tax can be as much as 40 percent of some governments’ revenue, so it is not right to cut the rates without a consensus from the governments,” said Kim Sung-ho, a representative of the Governor Association of Korea. “Raising the property tax also would need agreement from the general public.”

According to Kim, if the government halves acquisition tax rates, annual revenue would drop by an estimated 2.7 trillion won from the current 14 trillion won. The government would have to double property tax rates to make up for the shortfall.

Meanwhile, analysts and real estate agents generally have a positive take on cuts in the acquisition tax rate.

“The government has come up with a timely measure after transactions rapidly fell this month,” said Yoon Seok-mo, an analyst at Samsung Securities. “However, the tax cut should be permanent, if it is going to work.”

But Choi Ki-hoon, operator of a real estate agency in Banpo-dong, Seocho, one of the three most expensive districts in Seoul, take no stock in the government’s latest announcement.

“I hope such tax reductions will be permanent rather than being used as temporary tools that only make consumers hesitate,” Choi said.


Why the acquisition tax?

Hyun Oh-seok, deputy prime minister for the economy, has recently been under fire for a lack of leadership and an economy that has performed worse than expected. Despite the government’s April 1 real estate policy that included some radical measures, the market hasn’t budged much.

In the meantime, the acquisition tax has been seen as the easiest tool to stimulate the market in the near term since transactions increased during the three months it was in place.

Despite calls for extension of the cut, Hyun had been saying the April 1 policy would still be effective on its own. Some criticized the deputy prime minister for not considering the issue at all or deliberately putting off discussing it.

Local governments want to keep acquisition tax rates at their current level to maintain their financial independence from the central government.

And at a time when tax revenues are already decreasing due to the struggling economy, local governments are crying for measures to offset the shortfall.

“We shouldn’t assess the fiscal soundness of the local governments positively,” said Heo Won-je, a research fellow at Korea Economic Research Institute. “The governments’ independent sources for revenue are decreasing, so they are becoming more dependent on the central government.”

Heo pointed out that some governments that seem financially healthy are more reliant on the central government. “A government can be fiscally sound when it secures stable and consistent sources of revenue,” he said.

Experts warn of a local government bankruptcy case in Korea similar to that of the city Detroit.

Once the home of the automobile industry, Detroit was saddled with $18.5 billion in debt when it filed for bankruptcy last Friday.

While Detroit is the biggest city ever to file for bankruptcy in the United States, since the federal bankruptcy law was enacted in 1934 about 500 government entities have sought protection.

In Japan, the small city of Yubari in Hokkaido filed for bankruptcy in 2006 after borrowing tens of billions of yen to boost its tourism industry.

Despite lack of control over their revenue, local governments sometimes spend recklessly. Gwangju, with the highest dependency of the seven metropolitan cities, is now saddled with 15 billion won of debt after being chosen as the host city of the 2015 Summer Universiade and the 2019 World Swimming Championships.

Incheon has the highest debt-to-capital rate of 35.1 percent among the metropolitan cities, with 2.8 trillion won of that debt incurring late last year. The city’s debt jumped after it hosted the 2014 Asian Games.

“Local governments should be aware they can go bankrupt if they continue lax management,” said a researcher who declined to be named. “As the local election is scheduled to be held next June, more populist policies will be poured out in the coming months, aggravating local governments’ financial health.”

The old habit of the central government helping local governments close their deficits is a problem, the researcher pointed out.

“The U.S. law regards local governments as if they were private companies and there is a legal workout program for them to recover from bankruptcy. Korea should learn from that system,” he said.?