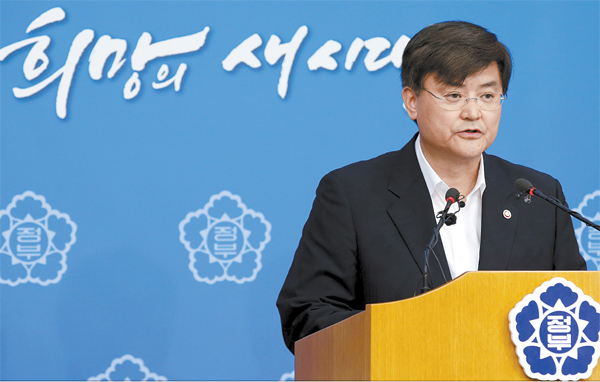 In a follow-up to the April 1 real estate revitalization plan, Land Minister Suh Seong-hwan details how the government intends to limit the housing supply yesterday in Seoul. [NEWSIS]

The government plans to either reduce or postpone construction of about 180,000 housing units in the Seoul and greater metropolitan area until 2016 to stimulate the real estate market.

Furthermore, the government will purchase some unsold apartments built by private contractors.

The plan released yesterday jointly by related departments including the Ministry of Land, Infrastructure and Transport was a detailed follow-up to the April 1 announcement of measures to boost the real estate market.

The government made it clear that the center of its real estate revitalization plan was to reduce the supply.

“Unless we solve the excessive supply, there’s a limit to revitalizing the market with only tax supports,” said Land Minister Suh Seung-hwan at a press briefing yesterday in central Seoul. “The oversupply in the greater Seoul area is extremely serious.”

Suh stressed that balancing supply and demand is necessary to normalize the real estate market. “Our plan is to rationally readjust the supply as there are large number of unsold apartments in neighborhoods like Yongin, Gimpo and Paju, and a lot of public housing projects that are planned,” he said.

As a first step, the Land Ministry said it will cancel public apartment construction projects for 29,000 units by state-run Korea Land and Housing (LH) in Goyang as well as Gwangmyeong-Siheung, all in Gyeonggi province, that are still in the planning stage. Additionally, it will reduce the number of public apartments in projects underway, while delaying approval of land for private projects.

The government also plans to address the problem of unsold privately- built apartments through various financial programs including the Korea Real Estate Investment Trust. Apartments purchased from the private sector will be then offered as public housing with cheap long-term rent managed by the state-run company LH.

After announcing its real estate measures in April, which included various tax benefits, the government frequently said that it would not roll out any additional measures. The real estate market after the announcement seemed to recover, with sales back up compared to a year ago. But it didn’t last long after the temporary acquisition tax cut expired June 30. The market quickly stalled while two-year long-term deposit, or jeonse, prices started to rise.

Although the government stressed that yesterday’s unveiling of plans to reduce or postpone public apartment projects is not an additional measure, the market speculates that the recent unfavorable turn of events pushed the government to quickly announce a follow-up.