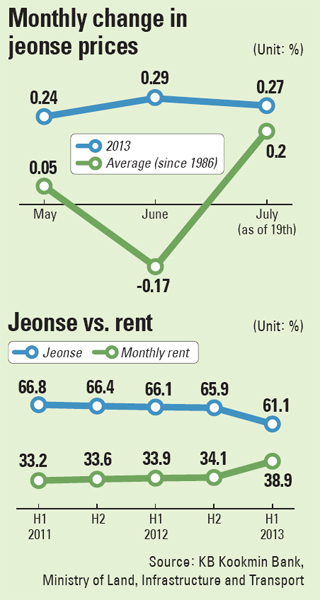 A 45-year-old surnamed Chin plans to move to a new apartment later this year and has been eyeing the Mokdong area in northwestern Seoul. Since he works in Yeouido, western Seoul, it would be a convenient commute and the neighborhood is known for its good educational environment, an important consideration for Chin since his son will be entering middle school next year.

However, while Chin was hunting for an apartment on jeonse (lump-sum deposit), he was puzzled after finding out that the deposit price for a 66-square-meter (710-square-foot) apartment in a new built-up area in the neighborhood had gone up by 50 million won ($44,927) this year alone. Even worse, of the 2,550 apartments in the area he preferred, none was out for jeonse.

In Korea, the most common form of rent is jeonse, in which tenants pay a high deposit, normally for a two-year contract. Jeonse prices vary according to neighborhood, but typically they are in the range of several hundred million won.

“I was told that jeonse prices surged lately, so I intentionally went apartment hunting in an off-peak season, but little did I know that there are only monthly rents available in the market,” said Chin. “I told my real estate agent that I’m willing to pay 10 million won to 20 million won more than the market price. And now all I can do is wait for his call.”

Usually, due to the heat, heavy rain and vacation season, this time of year is considered the slow season in the real estate market. This year, however, things look different. The price of jeonse keeps rising while there are few apartments out for yearly deposit.

According to research by KB Kookmin Bank, jeonse prices have been rising since June. Last month, the average jeonse for all apartments in Korea rose 0.29 percent, while it had risen 0.27 percent for the year as of last Friday. That is higher than the average price fluctuation compiled by the bank so far. From 1986, when KB Kookmin Bank started compiling data, jeonse prices dropped 0.17 percent in June and rose 0.1 percent in July.

This year, jeonse prices in the non-peak summer season have surged because of growing demand, industry officials say.

With an uncertain outlook for housing prices in general, even families who are able to purchase apartments prefer living on jeonse. According to a recent study by Real Estate Serve, 58.7 percent of high-income households in the Seoul metropolitan areas currently live in apartments they own, which is 6 percentage points lower than in 2006. On the other hand, 33.9 percent live on jeonse, which is a 6.2 percentage point increase over the same period.

“Though high-income people have spare money, they don’t feel the need to purchase an apartment at a time when there’s uncertainty in housing prices,” said Park Ae-kyung, a real estate agent in Mia-dong, northern Seoul.

Also, with the government’s acquisition tax cut on home transactions ending last month, families that had been waiting to buy have turned to jeonse.

“They are delaying their purchases because the acquisition tax cut has come to an end and the government’s April 1 real estate measures haven’t really had an effect yet,” said Choi Eui-kyu, a real estate agent in Yongin, Gyeonggi.

While there is growing demand for jeonse apartments, there is a lack of supply.

In an apartment complex with 500 housing units in Oksu-dong, central Seoul, there are no apartments out for jeonse. In May and June, three apartments were out and traded, but there has been none since. Industry officials note that homeowners prefer giving their apartments out for monthly rent or half-jeonse that require lower key money but higher rent.

According to the Ministry of Land, Infrastructure and Transport, of all housing rent contracts in the first half of this year, 39.8 percent were done on monthly rents, compared to 33.9 percent last year.

Meanwhile, industry experts predict the surge in jeonse prices to continue with the government’s recent announcement that it is considering a permanent reduction in the acquisition tax on home purchases. Those who have been considering buying houses are now likely to wait until the government finalizes its plan.

“The government should come up with follow-up measures as soon as possible to boost house purchases,” said Hong Seok-min of Woori Bank.