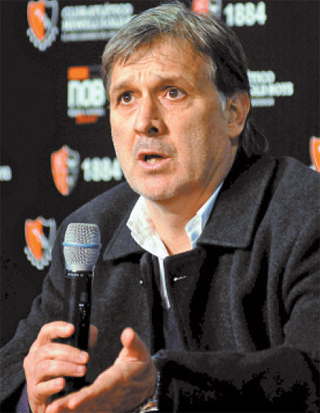 Gerardo Martino, a disciple of Barcelona’s possession-based style, is the club’s new coach.[REUTERS/NEWS1]

ROSARIO, Argentina - Gerardo Martino believes a recommendation from fellow Argentine Lionel Messi was behind his surprise appointment as Barcelona coach on Tuesday.

“The details of how the situation developed I don’t know (but) I have no doubt Jorge (Messi’s father) and Lionel had some influence,” Martino, the former Paraguay coach, said in Rosario.

“I’m sure they were asked their opinion and we’ve come to this outcome,” added the 50-year-old.

Barcelona hired Martino, an Argentine known as a disciple of the club’s possession-based style, to replace Tito Vilanova as coach, the Spanish champions said.

The 50-year-old Martino, a Rosario native like Barca’s World Player of the Year Messi, has agreed to a two-year contract, his new club said.

Barcelona went in search of a new coach after Vilanova stepped aside to undergo more treatment for throat cancer. Vilanova, 44, stepped down last week after leading Barca to the La Liga title in his first season since taking over from Pep Guardiola.

Known as “Tata” (grandad), the silver-haired Martino burnished his reputation after steering Messi’s old club, Newell’s Old Boys, to Argentina’s “Final” championship last month and to the semifinals of this season’s Libertadores Cup.

He made his name as a coach when he took Paraguay to the last eight of the 2010 World Cup, where they lost, 1-0, to eventual champions Spain, and after quitting in 2011, turned down a lucrative offer from Colombia.

Martino elected instead to return to Newell’s, the club where he played 509 matches as a midfielder under compatriot Marcelo Bielsa, from whom he is said to have inherited many of his coaching ideas. Martino added: “I was expecting some job proposals and I can’t say I was expecting this one.

“The situation was unexpected and of course it took me by surprise,” added Martino, who quit Newell’s after they lost their Libertadores Cup semifinal two weeks ago.

“This is a very important job opportunity which came about due to a very unfortunate occurrence [Vilanova’s illness],” Martino said.

“I’m very grateful they considered me, my staff and my work. The quality of the Barcelona squad, with Lio, is something any coach desires.

“I’m sure in our day-to-day [work] we’ll find ways to support [Messi] so he continues to be the extraordinary player he is.”