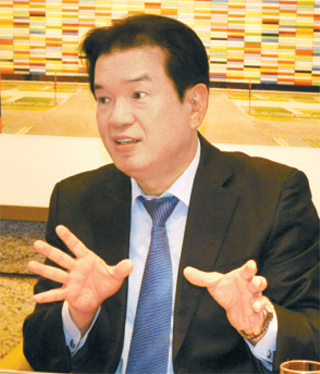 Bitexco Group CEO Ko In-suk is a veteran of overseas construction industry. After working with Hyundai Engineering & Construction for more than 32 years, in 2011 he moved to Bitexco Group, a Vietnamese construction and energy conglomerate.

While some Korean companies have plants in Vietnam, Ko manages a Vietnamese business with about 1,100 employees.

“I want to show how Korea developed and Koreans’ hard-working spirit by example,” said Ko yesterday in Seoul. “If you want to lead a group, you need be an example first.”

Ko’s relationship with Bitexco started about 2009, when Hyundai E&C was selected as a bidder for a 68-story financial tower in Ho Chi Minh City. He later received an offer from Bitexco Group Chairman Vu Quang Hoi, who wasn’t reluctant to offer the CEO position to a Korean if he could help the company achieve its vision.

“After retiring from Hyundai E&C, I wasn’t thinking about working overseas or in the construction industry,” he said. “But the chairman had a big vision for the country and I also thought it was a good idea and that I could contribute my know-how.”

During his career at Hyundai E&C, Ko’s job was to secure foreign projects and manage construction as head of the overseas construction business unit. But at Bitexco, Ko’s job is to issue orders and line up investors.

With the support of the Vietnamese government and World Bank, Bitexco Group is managing the country’s first public-private partnership project, a 100-kilometer (62.13-mile) expressway linking Dau Giay and Phan Thiet in Vietnam’s leading industrial zone. The project is seen as vital for economic growth, according to Deputy Minister of Transport Nguyen Ngoc Dong. The estimated construction cost is $757 million, with scheduled completion in 2019.

The government will fund 80 percent of the project and the private sector 20 percent. Of that 20 percent, Bitexco has a 60 percent share and is seeking investors for the remainder.

The investor roadshow for the project was held in Seoul yesterday with officials from the Vietnam government, World Bank and Export-Import Bank of Korea.

“As a Korean, personally, I want to promote this project to more Korean firms,” Ko said. “Korea’s image and status in Vietnam is good and it will be comfortable for Koreans to work there because I find that the cultures of two countries are similar.”

The 60-year-old CEO claims Vietnam is growing and has great potential, and Korean companies should be interested in joining in the development of national infrastructure.

“The Vietnamese population will reach 100 million in the next two or three years and the average age is 30,” Ko said. “Vietnam wants to benchmark the growth of Korea.”

Ko, a graduate of Hanyang University, said Korean companies should respect Vietnam first before talking business. “We know Koreans are passionate and aggressive, but you first need to earn their heart and respect them,” he said.

Ko’s other concern these days is to find the group’s next growth engine. Bitexco, founded in 1985, started in the textile business in the 1990s and expanded to real estate and hydro power plants in the past 10 years.

“I’m thinking about expanding to the high value-added service industry or new sectors,” he said. “Korea is a leader in the IT business and could help our company and Vietnam a lot.”