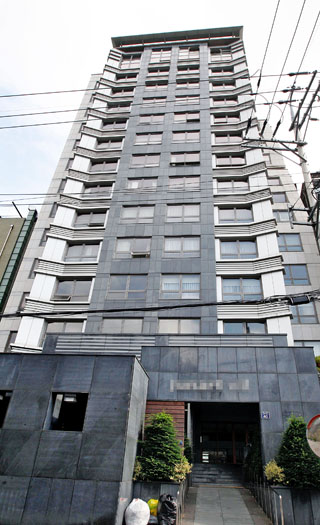 A building in the complex in which Chun Jae-yong, second son of former President Chun Doo Hwan, owned units in Itaewon, central Seoul. Chun sold two units in the complex on June 27. Chun and his family live on the 18th floor of an adjacent building.By Kim Seong-ryong

The prosecution is looking into sales of luxury condominiums by a son of former President Chun Doo Hwan hoping to find links to the former military strongman’s slush funds.

According to sources from the prosecution, investigators are looking into the sales of two luxurious units in Itaewon, Seoul, by Chun Jae-yong, the former president’s second son.

A special investigation team of the Seoul Central District Prosecutors’ Office questioned Tuesday a 37-year-old woman who purchased the properties with her husband, prosecution sources told the JoongAng Ilbo.

Chun sold the properties on June 27, the same day the National Assembly approved a special law to go after all members of the Chun family to find hidden assets purchased with money from the former president’s slush funds.

The woman and her husband bought the two condominiums for 3 billion won ($2.69 million), the sources said.

The prosecution suspects Chun Jae-yong rushed to dispose of the properties because the law enabled the government to not only attach assets of the former president but also to relatives suspected of colluding with him to hide the wealth.

Profits earned by investing the former president’s slush funds can also be confiscated by the government.

Chun ruled the country from 1980 to 1988 and was convicted in 1997 of accepting bribes and running slush funds during his presidency.

He was ordered to pay 220.5 billion won in fines, but he still has an outstanding balance of 167.2 billion won and has said he has no money to pay the rest.

The prosecution launched a campaign earlier this month to go after the entire Chun family.

Homes and offices of the former president, his children, relatives and associates were raided, and expensive artworks and financial records were confiscated.

According to the prosecution, Chun Jae-yong purchased three condominiums in Itaewon in 2001 under the name of his property management company, BL Assets.

The seed money of the investment came from bearer bonds worth more than 16.7 billion won that he received from his grandfather in 2000, the sources said.

An earlier probe by the prosecutors already proved that the bearer bonds were purchased with the former president’s slush funds. In a later trial, a court ruled that part of the money to purchase the bonds came from Chun Doo Hwan.

The prosecution has learned that Chun Jae-yong used complicated methods to launder the bonds. They were allegedly stored in safety deposit boxes under other people’s name and then sold through securities accounts created in the names of homeless people.

The proceeds were stored in seven accounts under other people’s names and later invested.

About 2 billion won of the money was used to purchase the Itaewon properties.

Prosecution sources said they will be able to confiscate the money Chun Jae-yong earned by selling the properties last month because they have proven the link between the townhouses and the former president’s slush funds.

If the buyers signed a fake contract to help Chun change the ownership of the properties, she will face criminal indictment, the prosecution said.

“This provides a missing connection between the bearer bonds of Chun Doo Hwan and the current wealth of the Chun family for the first time in almost a decade,” a prosecution source said yesterday.

During its investigation into Hyundai Group slush funds in 2004, the prosecution uncovered more than 16.7

billion won worth of bearer bonds owned by Chun Jae-yong.

The Seoul High Court ruled in 2007 that 7.355 billion won of that sum came from the former president, while the rest came from Lee Gyu-dong, father of the former first lady.

Chun Jae-yong challenged the tax authorities’ decision to levy a gift tax on the money and filed a lawsuit. The ruling from that trial in 2008 said the former president’s slush funds actually financed the entire investment of 16.75 billion won in bearer bonds, not just a part of it.

The Seoul High Court made the ruling at the time, pointing out that Lee had actually worked as the former president’s money manager.

The bonds, however, were not collected to pay the former president’s fines because the prosecutors missed the deadline to change the ownership of the bearer bonds.

In addition to their chase after the bearer bonds, prosecutors also confiscated seven safety deposit boxes owned by the Chun family and seized the valuables inside.

According to the prosecution source, the safety deposit boxes were registered under the name of Chun’s brother-in-law, Lee Chang-seok. The raids at the banks took place on Tuesday.

The prosecutors seized 50 savings bankbooks containing large deposits and 40 pieces of jewelry, including diamonds inside of the safety deposit boxes.

The prosecutors also discovered records of financial transactions and began an analysis into the flow of the money.

The prosecution also obtained the records of stock investments made by the Chun family and 47 associates over the past 20 years from brokerage houses.