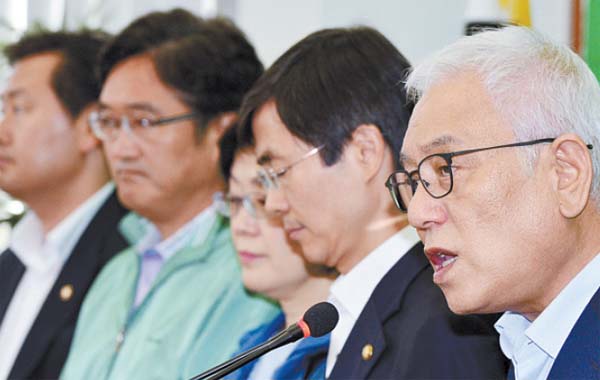 Kim Han-gill, right, chairman of the Democratic Party, makes proposals at a press conference yesterday in his office in the National Assembly.[NEWSIS]

The head of the largest opposition party yesterday proposed an exit strategy to the months of political wrangling over what was said, or wasn’t said, at a 2007 inter-Korean summit.

At a press conference, Kim Han-gill, chairman of the Democratic Party, proposed that an ongoing National Assembly special probe into the National Intelligence Service also look into whether former President Roh Moo-hyun disavowed the Northern Limit Line, the de facto western maritime border between the two Koreas, at the Pyongyang summit.

The National Assembly probe is looking into whether the NIS ran an online smear campaign against DP presidential candidate Moon Jae-in during the election campaign last year.

The two issues, in the Korean political context, are related. The NIS scandal can hurt the ruling Saenuri Party while the NLL scandal can potentially hurt the opposition. Moon was Roh Moo-hyun’s chief of staff and chief planner of the 2007 summit. The DP claims the Saenuri Party is using the NLL scandal to deflect public attention from the NIS scandal.

“I believe the people have already made up their minds about the government and the ruling party’s claim that Roh disavowed the NLL,” Kim said. “The Democrats tried to access the summit transcript in the National Archives to firmly end the controversy, but faced the preposterous situation of the transcript being missing,” Kim said.

Kim also said an impartial investigation should take place into the disappearance of the transcript of the dialogue between Roh and North Korean leader Kim Jong-il from the National Archives.

Kim said as head of the DP he will assume responsibility for the continuing political dogfight over the NLL remarks.

A special committee of 18 lawmakers yesterday began their probe into the allegation that the NIS operated the smear campaign against Moon.

“The National Assembly must conduct a thorough investigation to lay bare the truth and reform the National Intelligence Service,” Kim said yesterday. He repeated his party’s claim that the NIS declassified its copy of the transcript from 2007 summit to deflect public opinion from the NIS scandal.

And he criticized the Saenuri Party for using the NLL scandal in last year’s presidential election.

Kim’s exit strategy is unlikely to gain traction with the ruling party, which wants a prosecution probe into the disappearance of the summit transcript from the National Archives.

The Saenuri Party issued more statements yesterday to pressure Moon, who initiated the lawmakers’ unprecedented demand to access presidential records at the National Archives. The ruling party said Moon should ask the prosecution to investigate the disappearance of the transcript. The Saenuri and Democratic parties also continued their tussle within the committee probing the NIS scandal.

Representative Park Beom-kye, a Roh loyalist, told the committee that the National Intelligence Service, under Roh’s successor Lee Myung-bak, “altered” the contents of the 2007 summit dialogue and briefed the Lee Blue House on it, and that was how Saenuri Party’s Representative Chung Moon-hun got the information.

Chung served as unification affairs secretary for the Lee Blue House from 2009 to 2011 and was elected as a Saenuri lawmaker for a second term in 2012. Last October he made the revelation that Roh had disavowed the NLL during at the summit.

On the transcript released by the NIS, Roh makes vague and contradictory remarks about the NLL. Before the special committee, Park presented what he called a transcript of remarks made by Kwon Young-se, Korea’s ambassador to China who served as the senior manager of the Saenuri Party’s presidential campaign. He did not make public the audio file.

According to the transcript, Kwon told a reporter on Dec. 10, 2012: “I remember it was after the director was changed to Won Sei-hoon during the MB government,” Kwon said. “The National Intelligence Service put together the contents again. And it probably briefed the Blue House with that. It briefed it on the summery and it somehow ended up in the hands of Chung.”

“The NIS’s online smear campaign and the leak of the NLL transcript are identical twins,” Park said. “The ruling side had a contingency plan to continue its rule.”

“I was just saying what I had heard,” Kwon said. “If I actually told the reporter that the NIS had manipulated the transcript, how come the reporter did not write a story?”

The Saenuri Party also condemned the DP for bringing up the NLL transcript controversy at the special committee, saying the National Assembly’s probe is only mandated to look into the NIS’s alleged online smear campaign against Moon, not the other scandal.