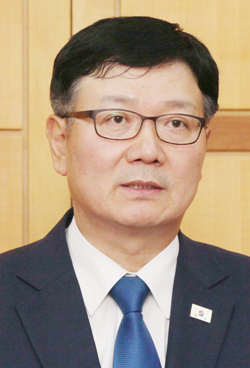 The chief negotiator for South Korea at the first and second round of talks with North Korea about reopening the Kaesong industrial park was replaced because of his submissiveness, sources exclusively told the JoongAng Ilbo.

Suh Ho, former head of the inter-Korean exchange and cooperation bureau under the Ministry of Unification was abruptly replaced by Kim Ki-woong, another high-ranking Unification Ministry official, on July 12, three days before the third round.

At the time, a Unification Ministry official told reporters it was a regular rotation and there was no special reason for it.

Since his replacement, Suh has been replaced in his bureau and not been offered a new position.

A number of sources said some hard-line officials at the Blue House and the National Intelligence Service didn’t like Suh’s attitude at the negotiating table.

The Blue House and NIS followed the negotiations in real time through a telecommunication device installed at the conference room in the Kaesong Industrial Complex where the negotiators were held.

President Park Geun-hye could listen to the talks just like she was listening to a radio in her office in the Blue House.

While listening to the discussion, Park was also able to relay instructions to the team in Kaesong, and she did, the sources said.

At one point she said, “Show a stern response,” and at another, “As we are at a disadvantage now, end this session now.”

North Korea couldn’t tap those instructions because they are sent as coded messages via telephone or fax.

They were received by a National Intelligence Service agent included in the delegation as one of the three negotiators.

Suh, an experienced negotiator with North Korea, was replaced because the Blue House and NIS didn’t like what they heard, the sources said.

“There was criticism that Suh didn’t properly respond to the claims of Pak Chol-su, the North’s chief negotiator,” a Southern official involved in the talks said. “He was allegedly too moderate.”

Sources said Pak claimed the so-called May 24 sanctions, which were set in place by the Lee Myung-bak administration in 2010, led to the closing of the complex.

The May 24 sanctions were a reaction to the sinking of the South Korean Navy ship Cheonan, which a group of international investigators blamed on North Korea.

Another South Korean government official said some hawks in the Park government didn’t like Suh’s passivity from the very first round, which went on for 16 hours from July 6-7.

“Suh tried to show a sterner attitude toward the North after the second round concluded,’’ the official said. “But it was too late.”

Some sources attributed his replacing to the NIS official who attends the talks as a negotiator, surnamed Huh, who reportedly wrote a report to the Blue House criticizing Suh.

“If the government can’t clearly explain why it had to change the chief negotiator to the public, they will struggle gaining trust from the people for its North Korean polices,” said Yang Moo-jin, a professor at the University of North Korean Studies.