For Hong, much on line vs. Japan

For Hong, much on line vs. Japan 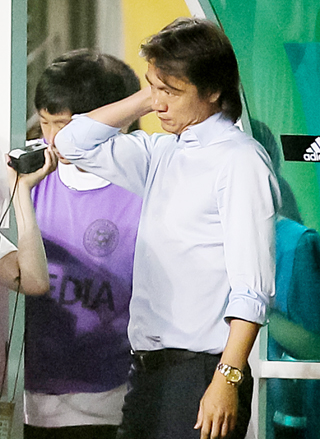 Korean national football coach HongMyung-bo reacts after Korea was held to a 0-0 draw by China during an EastAsian Cup match in Hwaseong, Gyeonggi, Wednesday. [NEWS1]

Hong Myung-bo will once again coach Korea against Japan, but his bigger enemy will be himself, rather than Alberto Zaccheroni’s squad.

The Korean national team will meet Japan at Jamsil Olympic Stadium at 8 p.m. on Sunday during the final match of the East Asian Cup. It will be the former Olympic coach’s first match against Japan since the London Olympics, where Park Jong-woo’s controversial celebration of Korea’s 2-0 victory took an already politically charged rivalry to another level.

Hong has many things to prove Sunday. Can he lead the Taegeuk Warriors to another victory over Japan - an opponent many Koreans take for granted they will beat? Expectations are higher than usual because the match is at home, where Korea has not beaten Japan in 13 years. It is the first time Korea will host Japan at Jamsil since it defeated the Samurai Blue, 1-0, in April 2000, when Hong was Korea’s captain. Since then, Korea has hosted Japan three times but fell in the first two matches - a 1-0 loss in a friendly match at Seoul World Cup Stadium in April 2003 and a 1-0 loss in the East Asian Championship in Daegu in July 2005. In the latest Japan match at home, a friendly held at Seoul World Cup Stadium in October 2010, the two teams drew, 0-0.

The captain of the semifinalists of the 2002 FIFA World Cup, Hong bolstered his standing as a national hero with a win over Japan in the third-place decider at the London Olympics. It was Korea’s first Olympic medal in football, which was crucial in Hong replacing Choi Kang-hee as national team coach. But, some, in particular from overseas, wondered how much credit for the bronze medal should go to the promise of Olympic players receiving an exemption from compulsory military service. Hong might feel obliged to show that the team won not just because of that incentive.

His first victory as national team coach is also at stake against Japan. Despite dominating the game, his team failed to strike against China in Hwaseong on Wednesday, extending its scoreless streak to two games. Including the first match against Australia last Saturday, Korea had 31 shots, 17 of them on target, during the East Asian Cup, but all were squandered by the lack of a finishing touch, which Koreans fear is becoming the hallmark of its football team.

“It is our final game [during the East Asian Cup], and a Japan match. Without saying, we are smart enough to know what a significant game it is,” Hong told JTBC, the exclusive broadcaster of the four-nation event, after the 0-0 draw with China. “There is no other choice for us but to do our best to the end.”

The Sunday match will also be tense for the players. Many of Hong’s Olympic team members, including Park, were called up for the East Asian Cup. Five members of Zaccheroni’s team also played at the London Olympics, including defender Daisuke Suzuki, and midfielders Hotaru Yamaguchi and Takahiro Ogihara.

Park earned the nickname “Dongnip Tusa” (referring to an independent fighter during the 1910-45 Japanese colonial rule), after he held the banner “Dokdo is our land” in celebration of the victory against Japan in London. Japan, which at the time provoked Korea with another round of claims to Korea’s easternmost islets, cried foul over Park’s action, and FIFA and the International Olympic Council launched an investigation into the case, while withholding a bronze medal from the 24-year-old midfielder. He eventually received the medal after the sports governing bodies concluded that it was not an intentional act but was made in the heat of the moment.

Park, looking back the time, said it made him a more mature person. But, his hunger for a win against Japan is still the same, he said.

“Whenever we meet Japan, it is a must-win game,” Park said. “There is no doubt about that. I know its significance better than any other.”

Until Wednesday, Korea was in second place behind China, which was ahead on goals scored. China also drew twice, but scored three goals against Japan on Sunday. Its place is volatile. The winner of a Japan-Australia match last night, if there is, would surge ahead of Korea.

It may end up as Korea’s worst East Asian Cup since 2005. Korea finished last in the second edition, which it hosted, after scoring only one goal. It lost twice and drew once in 2005.

Korea won the inaugural event in 2003, when it scored four goals. It also won the 2008 edition with five goals. It scored eight goals in 2010, but finished as the runner-up to China.