Growth in Q2 was unexpected

Growth in Q2 was unexpected 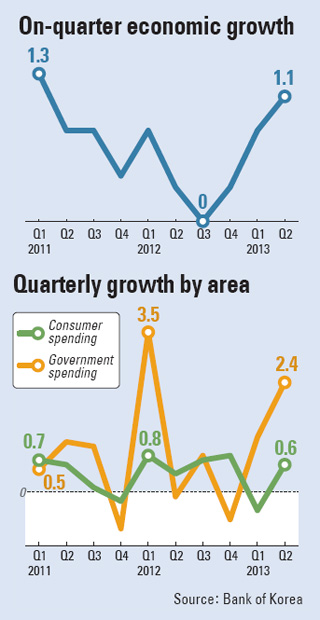 Is Korea finally clawing its way out of the low-growth rut it’s been stuck in for more than two years?

According to the Bank of Korea, the economy in the second quarter expanded 1.1 percent compared to the first three months of the year. The last time the economy expanded more than 1 percent quarter-on-quarter was in January-March 2011.

The quarterly expansion announced yesterday exceeded not only the central bank’s earlier projection of 1 percent growth but also the private sector projections of between 0.8 percent and 0.9 percent.

Compared to a year ago, the economy grew 2.3 percent, which is the sharpest increase since the second quarter of 2012, when it increased 2.4 percent year-on-year.

The central bank attributed the better-than-expected performance to improved consumer spending, which turned around from a 0.4 percent drop in the first three months of the year to a 0.6 percent increase in the second.

Just as important was government spending on various projects such as infrastructure. Government spending in the second quarter grew 2.4 percent compared to the January to March period, when it expanded 1.2 percent.

Matthew Circosta, a Moody’s Analytics economist, said the second quarter growth was not only better than expected, but also “an upside surprise.” 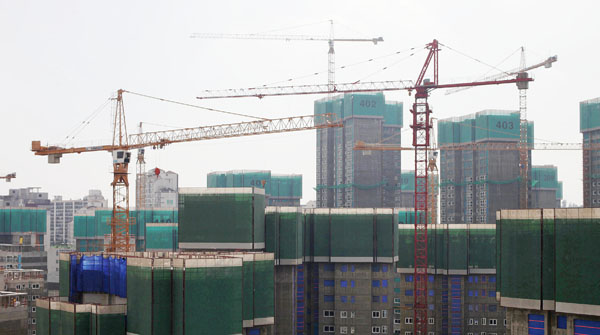 Apartment buildings under construction in the district of Mapo in western Seoul on Wednesday, Korea’s economy grew the most in more than two years on stronger government spending and private consumption even as a slowdown in China clouds the outlook. [BLOOMBERG]

In May the government pushed through a 17 trillion won ($15 billion) supplementary budget aimed at boosting the economy while the central bank played a role easing monetary policy by cutting 0.25 percentage points off the key interest rate to 2.5 percent.

“This is a great result and one that has also come from left field, as indicators up to May had suggested slower, not faster, growth in Korea,” the Moody’s Analytics economist said. “June must have been a good month for manufacturing, retailing, construction and wider service industries.”

The economist added that the news shows the fiscal and monetary stimulus is working, which gives greater confidence in a further strengthening of the economy in the second half of the year.

“Overall, these data may push up our full-year 2013 growth forecast closer to 2.5 percent, above our June estimate of 2.1 percent,” Circosta wrote.

But the real question still remains: Will this growth last?

The central bank said it expects the economy to further expand in the second half.

“In the second half, we expect exports of ships as well as facility investment to improve,” said a BOK official. “Additionally, as the government’s contribution will further strengthen the economy, chances that the second half growth will be lower than the first half are small.”

The official said the central bank is sticking to its revised outlook that the economy will expand 2.8 percent in 2013. Earlier this month the central bank raised its economic growth outlook from 2.6 percent.

However, some analysts think the economy still lacks momentum while uncertainties like slowing economic growth in China prevent too much optimism.

“The second quarter figures improved but they have not reached a level to place huge significance on them,” said Jeong Yong-taek, a KTB Securities analyst. “Although the economy is not getting worse, it still remains lukewarm and it doesn’t seem as though there’s any growth momentum in sight that could really boost it in the second half.”

Jeong noted that the second quarter recovery is the result of the supplementary budget, improvement in the construction market thanks to various tax benefits on real estate that the government announced in April and favorable conditions outside of Korea.

One is falling commodity and crude oil prices along with a recent depreciation of the won, which helped cushion the threat of the weakening Japanese yen to Korea’s exports.

In general, signals for the near future are mixed.