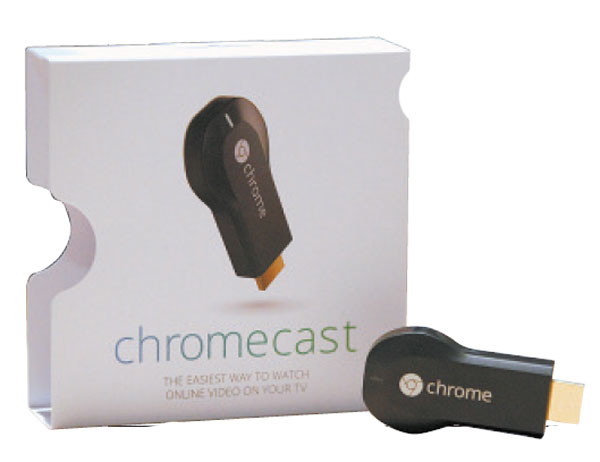 Google, owner of the world’s most popular search engine, introduced a device that sends YouTube and Netflix videos from phones, tablets and laptops to televisions, bolstering competition with Apple.

Chromecast, a small $35 dongle that plugs into a TV’s HDMI input, lets customers watch and control online videos without their remote control. The gadget, unveiled at an event today in San Francisco, works with Android devices as well as Apple’s iPhone, and enables users to continue using their phone for other activities while streaming.

“Of course people would want to watch YouTube and Netflix on the device with the biggest screen, but the user experience on the TV has been so difficult,” said Rishi Chandra, a director of product management at the Mountain View, California-based company. “If you have to stop using your phone just to watch something on TV, it’s not a viable solution.”

The announcement of Chromecast came after Google introduced an updated Nexus 7 tablet, which has a sharper screen and is being made in partnership with Taiwan’s Asustek Computer In tablets, devices running Android software have been gaining share versus Apple’s iPad.

The move into televisions follows previous unsuccessful efforts for Google, including a media-streaming device called Q that never shipped based of poor initial feedback, and the Google TV set-top box that has lagged behind the competition.