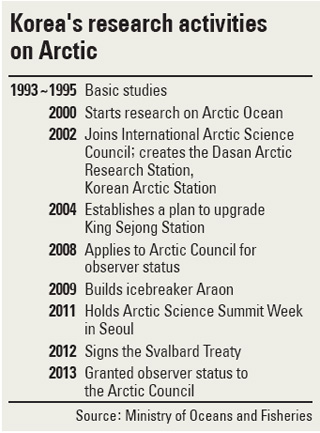 The Ministry of Oceans and Fisheries announced yesterday a comprehensive plan to make Korea an advanced researcher on the resource-rich Arctic region.

Hyundai Glovis will lead the first attempt to carry oil from Europe to Korea by leasing an ice-resistant tanker from Sweden’s Stena Line. Hyundai Merchant Marine and Hanjin Shipping also are reviewing plans to use Arctic routes.

Those companies will get government support including reductions in port facility fees.

Korea will sign an MOU with Russian authorities to build a port on the Arctic by the end of the year.

Last month, the ministry said it began talks with Russia to open a commercial route across the Arctic Ocean.

To reach Amsterdam, ships now cross the Indian Ocean, traverse the Suez Canal and ply the Mediterranean, a journey of about 20,000 kilometers (12,427 miles) from Busan. The Arctic Ocean route would reduce the distance to 13,000 kilometers and the time from 40 to 30 days, the ministry estimates.

Arctic routes were formerly limited to ice breakers, but global warming has opened them to commercial vessels for about four months during the summer.

“Cooperation with coastal states - the United States, Canada, Norway, Russia and Denmark - is most important in increasing activities in the Arctic region, since the countries have exclusive economic zones,” said Yoon Jin-sook, minister of oceans and fisheries.

Korea was granted permanent observer status to the Arctic Council along with five other countries including China and India in May after a heated discussions by the eight members of the council - the United States, Canada, Russia, Iceland, Denmark, Finland, Norway and Sweden.

These countries have sought economic opportunities in the region and view observer status in the Arctic Council as a means to closer cooperation with Arctic countries as well as better access to sustainable development in the region.

Observer countries can watch but not speak at council meetings.

Yesterday’s plan also includes enhancing research activities in polar regions. Korea will participate in establishing an integrated monitoring system in Svalbard, an archipelago in the Arctic Ocean. The system is aimed at observing environmental changes in the region.

The government will expand the Arctic Dasan Station created in 2002 to strengthen the country’s infrastructure to study the region.