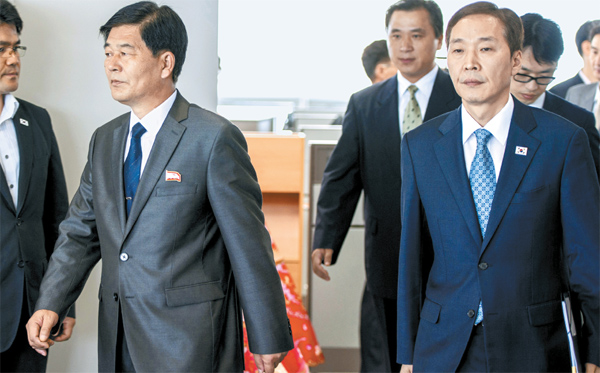 With grim looks, South Korean chief negotiator Kim Ki-woong, right, and his North Korean counterpart Pak Chol-su, left, walk into the sixth round of talks to resume operations at the Kaesong Industrial Complex. Pak stormed into the South Korean press center after the talks broke down. [NEWS1]

KAESONG - North Korea threatened to send troops into Kaesong if the jointly-run industrial complex in the city is shut down permanently.

The sixth round of talks over reopening the factory park broke down once again yesterday, leading to a melee between negotiators from the two sides.

According to South Korea’s Joint Press Corps, about 20 North Korean officials, including the chief negotiator Pak Chol-su, suddenly entered the South Korean press center on the fourth floor of the General Support Center for the Kaesong Industrial Complex at 5:23 p.m. yesterday to complain about the breakdown of the talks.

They made the military threat and distributed a press release and drafts of agreements that South Korea didn’t approve. Then South Korean officials appeared in the press center, tried pulling the North Koreans out, and clashed with reporters who wanted to keep the documents distributed by the North’s officials.

Unification Ministry spokesman Kim Hyung-suk said in a statement last night that it regretted North Korea “effectively declaring the breakdown of the negotiation” and “the fate of the Kaesong Industrial Complex is at a critical stage.”

A total of 17 South Korean reporters, photographers and video camera crews were in the press center when the melee took place. The failed negotiations took place on the 13th floor of the same building.

The North Koreans distributed 21 pages of documents to the reporters, including a three-page press release, two basic statements and three draft agreements they had proposed to their South Korean counterparts at the third, fourth and sixth rounds of the talks.

In the press release, North Korea warned that if the Kaesong park was permanently closed, it would send troops to the strategically important city of Kaesong, which is only about seven kilometers (4.3 miles) away from the Military Demarcation Line with South Korea.

“If the Kaesong cooperative businesses once again face disruption, our troops will occupy the areas [near] the Military Demarcation Line [near Kaesong],” the press release said. “The roads [toward Kaesong] off the west coast would be permanently blocked.”

The North Korean delegates went to the press center after they finished closing discussions with Southern negotiators at 5:20 p.m., the Joint Press Corps said. In the press release, the North said it “made sincere efforts to resolve the matter of the Kaesong complex as soon as possible.”

North Korea claimed that “both parties reached agreement to prevent any further shutdown” and “both sides agreed to operate the complex without being affected by any political circumstances and never commit acts to deter the operation.”

The North Koreans claimed they accepted all of the South’s demands, such as ensuring the safety of South Korean workers; restoring telecommunications with the South and the entry of Southern cargo; an internationalization of the complex sought by Seoul; and putting into place concrete measures to prevent further disruptions of business in the future. But the South continued “making vague claims,” the press release said, and “unilaterally demanding us to take all responsibility for the shutdown.” It blamed the South for “driving the talks to the brink of breakdown.”

It also said it suspected South Korea of wanting to permanently shut down the complex” by “deliberately dragging out the talks.”

Then the South Korean officials clashed with reporters as they attempted to seize the documents that the Northern officials distributed. Unification Ministry spokesman Kim Hyung-suk said in the statement last night that if North Korea doesn’t show “sincerity” to prevent a shutdown of the complex in the future, the South would “make a grave decision.”

The Unification Ministry said it asked Pyongyang to hold additional talks but North Korea argued the negotiations “were already broken.”

The most controversial issue at yesterday’s talks was North Korea demand that the South “not to make any defiant political remarks and military threats,” which refers to the South Korean media’s comments on its use of the Kaesong park as a source of hard currency and upcoming Korea-U.S. joint military drills. But South Korea didn’t accpet the demand, leading to the conflict yesterday.


BY KIM HEE-JIN AND THE JOINT PRESS CORPS [heejin@joongang.co.kr]