Korea gives back to foreign soldiers and families

Korea gives back to foreign soldiers and families 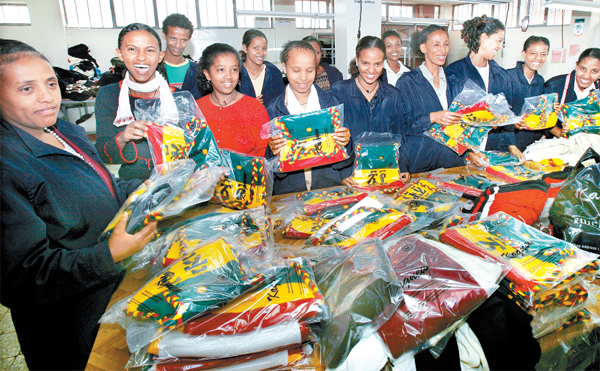 Descendants of 1950-53 Korean War veterans work at a factory built by Koica to help employ veterans and their relatives on the outskirts of Addis Ababa in December 2007. By Park Sang-moon

Sixty years ago, the father of 25-year-old Ethiopian Abraham Yifter Asegahegn fought in the 1950-53 Korean War on the side of the United Nations’ Allied Forces.

Ethiopia’s Royal Guards underwent an eight-month training process and entered the war in May 1951.

Now, Asegahegn and a group of 60 children and grandchildren of Ethiopian war veterans are in Korea for eight-month training programs in fields such as electronics and motor technology. They are the first batch of some 300 descendants of Ethiopian Korean War veterans to be invited by the Korea International Cooperation Agency (Koica) to be trained here for employment opportunities by the end of next year.

Some of them will be hired by Korean companies including top conglomerates like LG Group after they complete their training, while others will return home. Tomorrow, Korea and the 21 nations that contributed troops and humanitarian aid commemorate the 60th anniversary of the armistice agreement that ended the three-year war on June 27, 1953.

In the aftermath of the war, South Korea was a destitute country where people ate bark off of trees. But over the course of six decades, it has risen to a country with a GDP of $1.15 trillion and a member of the G-20. In 2009, Korea became the first country to go from being a recipient of overseas assistance to become a donor nation after it became a member of the OECD Development Assistance Committee. 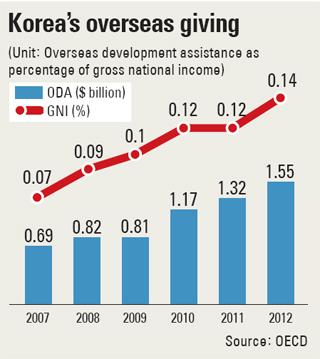 The program for offspring of foreign veterans of the Korean War is one of the ways Korea is honoring the sacrifices made by the Allied nations. Over the past half century, Korea has tried to repay those countries with scholarships, rural development and infrastructure projects, medical assistance, donations, educational support and investments.

Since December, Asegahegn has learned electronics in Daejeon, in a Korea Chamber of Commerce and Industry program along with intensive Korean language courses.

“My father said that in the Korean War, the Ethiopians fought very hard and committed themselves to restore peace in Korea,” he said. “He told me to work hard because the Korean people are hardworking, and I have to do my best to complete my education.”

His father, now 91, returned to Seoul for the first time last year as part of the Korean War veteran visitation program. Since 1975, 158 Ethiopian war veterans have been invited back to Korea by its Ministry of Veterans and Patriots Affairs. Over 29,000 Korean War veterans of the Allied forces have revisited Korea on the government’s invitation since 1975. 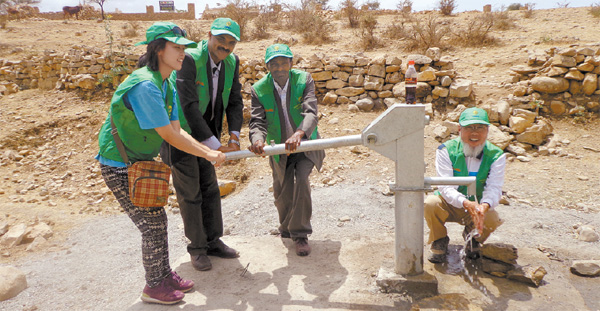 Korean volunteers operatea water pump installed in Addis Alem in central Ethiopia with a town leader in 2010.Provided by Koica

Asegahegn recalled his father’s trip. “He told me that he only remembered the mountains and trenches, and when he came here, Korea was completely different because it was very much developed. He was very pleased.”

Though its troops and military equipment were depleted in the aftermath of World War II, Ethiopia decided to join the UN forces in August 1950 responding to the United Nation’s Security Council resolution calling on member states to assist South Korea following North Korea’s invasion over the 38th parallel dividing the peninsula on June 25, 1950.

Ethiopian Emperor Haile Selassie named the battalion Kagnew, meaning “to establish order from chaos” and “to destroy.” The soldiers underwent an eight-month training period under British commanders and left for Korea in April 1951.

The UN Command were the 16 countries who sent troops - the United States, United Kingdom, the Philippines, Thailand, Canada, Turkey, Australia, New Zealand, Ethiopia, Greece, France, Colombia, Belgium, South Africa, the Netherlands and Luxembourg - and five who lent humanitarian aid - Denmark, India, Italy, Norway and Sweden. Together they deployed some 1.94 million troops, according to the Korean Ministry of National Defense, the largest coming from the United States, 1.78 million soldiers. A total of 154,881 UN Command soldiers were killed in the war. Ethiopia sent 6,037 troops, and 121 were killed in action while 336 were wounded.

Left: A woman tends to a child at the pediatric division of the Ismael Roldan Valencia Hospital in Quibdo in western Colombia to which the Korean government donated 2 million dollar worth of medical equipment last year. Right: A colonel who participated in the Korean War points to photographs displayed at the Korean War Memorial in Fort Bonifacio, Manila. Provided by Koica

“I am very proud of my father because I got this chance because of his persevering through the Korean War,” said Asegahegn, who returns to Ethiopia next month.

“Some 60 years ago, Ethiopia was better off than Korea,” said Suh Jung-hwan of Koica’s East African division. Now Korea is more developed and it’s time for it to pay back. “Some of the Ethiopian war veterans’ descendants have done their training here, and some will return to Korea to be employed here.”

The program will be extended to 300 descendants of Korean War veterans by the end of next year, Suh said.

“If I get a chance to get a job here, it would be exciting for me because I want to be more experienced in my field and learn about mobile maintenance in an electronics company,” said Asegahegn.

Lulabeba Tafesse Tedla’s maternal grandfather also fought in the Korean War, and she too is a part of the electronics training program for descendants of Ethiopian veterans.

“He hasn’t told me many things about his experience in the war, but I remember he told me he joined voluntarily,” said 23-year-old Tedla. “I am grateful for this opportunity because of my grandfather. I knew quite a bit about Korea before coming here - that Korea is one of the most developed countries.”

On the outskirts of the Ethiopian capital of Addis Ababa is a “Korea Village,” a town established for Korean War veterans and their descendants after the soldiers returned home.

Between 1975 and 1990, Korea donated around $350,000 in aid yearly in the form of medical supplies, infrastructure, trucks and equipment through the Korean government and civilian groups.

From 1991 through 2009, Korea donated $25.6 million in aid to Ethiopia including machinery and medical equipment.

Koica founded an office in Ethiopia in 1995 and has launched numerous projects including medical support, vocational training programs and the building of a carpet factory to support war veterans and their descendants. A team of Korean volunteers is currently applying the ideas of the Saemaeul Movement, or rural development strategy, in five small, poverty-stricken towns, including Me’kele, which has a population of 500.

Private, religious and civilian groups have also been active in donating to Ethiopia over the years.

Koica’s Suh said his team is looking into a project that can bring an educational radio program to the Addis Abba area within this year. “Many students, especially those in rural areas, do not have access to textbooks or cannot attend classes, so we hope radio lectures will be able to reach out to them,” he explained.

Last month, an Ethiopian delegation of 180 led by Foreign Minister Tedros Adhanom Ghebreyesus, whose father was a Korean War veteran, visited Korea as the countries celebrated 50 years of bilateral relations.

The Memorial Hall for Ethiopian Veterans of the Korean War in Chuncheon, Gangwon, shaped like Egyptian huts, was completed in 2007, the first memorial hall for the countries that sent troops to the Korean War.

The Monument for the Participation of Ethiopia in the Korean War was established in May 1968, in part with contributions by the citizens of Chuncheon, a major battle site, and was inaugurated by Ethiopian Emperor Haile Selassie on a visit to Korea.

Chuncheon also supported elementary students in Addis Ababa, its sister city since 2004, with 1,020 second-hand computers as well as 19 fire engines and 21 ambulances.

Ethiopian Ambassador Abdetta Dibaba called Chuncheon, “a mini-Ethiopia” and said that the visit last month of the foreign minister “showed solidarity and appreciation of Korea” as the two countries celebrated 50 years of bilateral ties.

“Today, Korea is an advanced country with advanced technology. The relationship with Korea has been cemented by blood,” said Dibaba.

According to the Korea Trade Promotion Corporation, trade between the two countries almost doubled to $133 million between 2007 and 2012.

When the Korean War broke out, the United Nation under Secretary General Trygve Lie quickly responded and on June 28, 1950, passed a resolution authorizing military support of member nations for South Korea.

“We must not only remember the United States and the United Nations,” said Koica’s President Kim Young-mok. “There are many other developing countries that helped. Among those are Thailand, Turkey, Ethiopia, the Philippines and Colombia.” Thailand and Turkey are no longer recipients of aid from Korea.

The Turkish forces established a school and shelter for war orphans between 1952-56, which educated almost 800 Korean children.

The Ministry of Patriots and Veterans Affairs of Korea has invited over 29,000 veterans from the allied nations to Korea over the course of 30 years, and has been running a youth peace camp for children and grandchildren of Korean War veterans since 2009. Some 945 descendants of Korean War veterans have visited. The Korean government and educational institutes have also extended scholarship programs to descendants of war veterans.

Colombia is the only South American country to send troops during the Korean War, deploying 5,100 soldiers. Colombian soldiers left for Busan in June 1951.

Koica invested more than $24 million over the past two decades in Colombia.

Woo Nam-il, of Koica’s South American team, said that Koica’s main project in Colombia is a $11.5 million grant-type aid project to build a 15,000 square-meter rehabilitation center with the Colombian Defense Ministry to be completed next year. The center “will help ease the burden of elderly war veterans,” she said.

At the outbreak of the war, the Philippines held the chair for the United Nations General Assembly, which Philippine Ambassador Luis Cruz said “played a role in the Philippines participating in the Korean War.”

In the past twenty years, the Korean government invested in some $140 million in development projects in the Philippines, who sent 7,420 troops during the war.

Cruz told the Korea JoongAng Daily, “We are the closest two countries of the participants of the Korean War.”

“Korea has given the most in terms of aid for veterans and their children and grandchildren through their programs such as building airports, roads and other infrastructure,” he said. It has not only been the Korean government but also educational institutes, NGOs, and other volunteers, he added. Korea is one of the Philippines’ top five trading partners, with a trade volume of $11.5 billion last year.

Korean Foreign Minister Yun Byung-se told the chief envoys of the 21 Allied nations at a ceremony Wednesday, “I do not know of any other example in modern history in which more than 150,000 men and women from all across the international community made sacrifices to protect a country they had never known.

“The Korean War is no longer ‘the Forgotten War,’ as it was once known,” he said. “It is a living history that will be with us for eternity, it is a proud memory of the bond of brotherhood we share.”