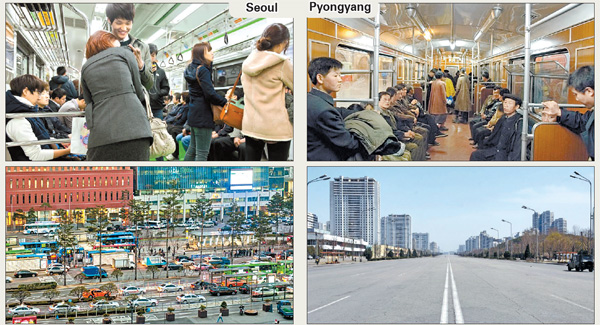 In his book, “Korea-Korea,” German photographer Dieter Leistner offers a blunt look at the contrasts between North and South Korea. Top: Scenes from subway cars in the two nations show very different atmospheres. Above: An average traffic day in Seoul makes a vacant road in Pyongyang look even more empty. By Dieter Leistner

To peruse Dieter Leistner’s book of photos from the two Koreas is to be confronted with dramatic juxtapositions. One page features two subway scenes that are a world apart - one picture is of a smiling, lovey-dovey couple watching something on a digital gadget, and in the other, passengers on a dimly-lit car look frozen, as if they’re being watched. It’s not too tough to tell which Korea is which.

In his book, “Korea-Korea,” which came out in April, the German photographer tries to present comparable situations and let the contrasts speak for themselves. The work lays bare the stark gap that has opened up between the two nations over the course of over half a century of division.

Leistner, 61, a photography professor at Julius Maximilian University of Wurzburg, was given official permission to photograph public spaces in Pyongyang in 2006. Six years later, in 2012, he made his way to Seoul, where he found similar locations but a very dissimilar feel.

The JoongAng Ilbo interviewed the photographer about his photographic journeys to the peninsula.

Q. What led you to embark on this project?

A. It was several years ago, when the Frankfurt Book Fair’s partner country was North Korea. This is when it all started. The city’s cultural office asked me to photograph Pyongyang on this occasion. But I didn’t make it in time for the book fair, because I had to wait five years for the entry permit.

Images from North Korea are rare, which is why I’ve been so curious about this country of the unknown. I wanted to document one of the last remaining socialistic countries. I’ve tried to see both cities through the same photographic eye. 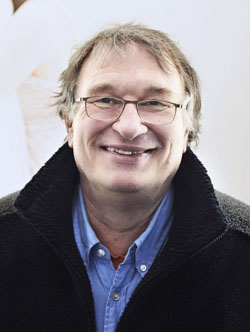 What kind of message were you trying to deliver with the project?

I guess what I wanted to find out was the similarity of the two countries even though they have been separated for almost 60 years. However, in public life, there are hardly any similarities to be found. But what struck me was that people in both the North and the South take a lot of pictures and enjoy smoking. The cityscape of the North is without traffic, shops and advertising and therefore can appear colorless in comparison to the South.

What’s the biggest difference between the two Koreas?

Seoul is characterized by its vivid life but Pyongyang is more silent.

My visit lasted two weeks and I was supervised throughout the entire time, without pause. I couldn’t even cross a road without being accompanied. An interpreter, a chauffeur and a security service were observing me all day long. A lot of the photos were taken out of the car or without looking through the viewfinder. This is how I took so many pictures that haven’t been censored.