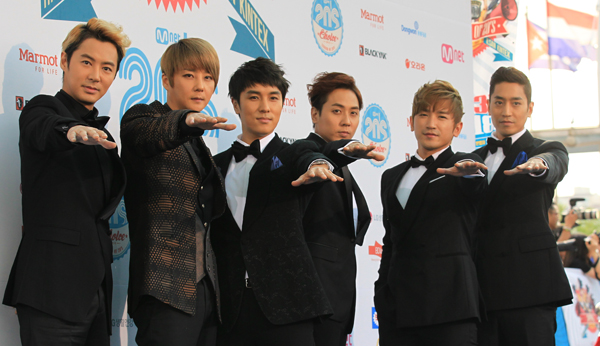 The boy group Shinhwa has been introduced in the monthly magazine The Atlantic as an example of an idol group with lasting power.

In the story titled What the Backstreet Boys Could Learn from K-Pop, the magazine said each and every member of Shinhwa is still active in the entertainment scene in their 30s - 15 years after their debut - unlike members of the Backstreet Boys, who have not been active in the scene or popular among the younger generation since the group debuted in 1993.

It said there is hope for the American idol group, saying, “Luckily, they have a model to imitate: Shinhwa, the Korean equivalent of the Backstreet Boys.”

Shinhwa, which debuted five years after the American group, released its 11th album, “The Classic” in May to show they can still coordinate a powerful and serious performance while each member shows a more comical or down-to-earth character on talk shows or other programs.

“What the Backstreet Boys can learn from Sinhwa is to get over the awkwardness of being grown men in a boy band and embrace the jokes thrown their way,” said the magazine.

“They over-rely on puns that only older fans would get, or worse yet, puns that will only serve to trigger sneers from younger pop fans.”

The group is scheduled to perform at the 2013 Shinhwa Grand Finale “The Classic” concert in Seoul for two days starting Aug. 3 at Seoul Olympic Park in Songpa, southern Seoul.