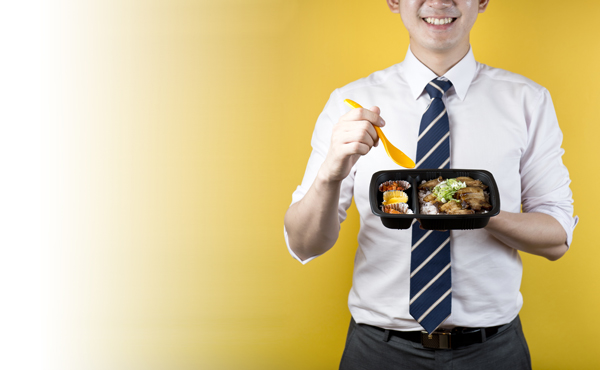 The spread of the lunch box used to depend on the growing number of households with one or two persons and the economic downturn. Nowadays, lunch boxes that are cheap and easy to eat are becoming increasingly popular. The domestic packed lunch market at convenience stores and lunch-box franchise stores has grown to be a 2 trillion won ($1.8 billion) industry.

In line with the wholesome food trend, a wide variety of lunch-box products that are endowed with both taste and nutrition are pouring out.

And it has been a year since Japan’s largest lunch-box company, Hotto Motto, entered the market. Hotto Motto has 2,600 stores in Japan and sells 300 million lunch boxes annually.

In addition, even midsize companies like Harim and Dongwon Fish have jumped into the lunch-box market, decisions that turned out to be promising as the Korean economy continues to struggle.

It started the business by partnering with the Japanese processed food company that operates Yunotani lunch-box stores, and HYmeal is banking on the taste of its rice for success.

“Side dishes should taste more delicious when the taste of rice is good. We traveled around the country tasting rice and chose the most appropriate rice to go with the lunch boxes in Cheorwon, Gangwon,” said Byun Dong-hwan, who works for HYmeal. 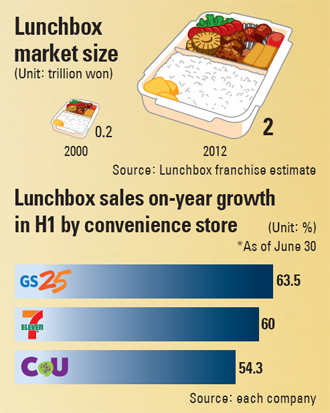 There are about 30 varieties of lunch boxes.

“About 150 to 200 boxes are sold every day at the HYmeal store in Yeouidoand the premium lunch boxes at around 30,000 won ($27) are also popular,” said Byun. “We plan to open two more stores this year and start a franchise business.”

“Although the lunch boxes cost about 5,000 won to 6,000 won, their quality is as good as those lunch boxes at family restaurants, which retail for more than 10,000 won. More than 600 lunch boxes are sold at our stores in Korea every day,” said a spokesman for Hotto Motto.

It aims to open two more stores by the end of this year, and increase the number of franchise stores in Korea to 200 within three years.

In addition, a series of midsize domestic companies and foreign lunch- box brands are jumping into a local market. That includes 20,000 convenience stores - 7,200 CU stores, 6,600 GS 25 stores and 6,300 7-Elevens - and about 20 lunch-box franchise brands such as Hansot and Bon.

According to the industry, the domestic lunch-box market is estimated to be 2 trillion won annually. Of that, lunch boxes at convenience stores account for 700 billion won.

The lunch-box market has grown tenfold since the early 2000s, when it was about 200 billion won.

“The lunch-box market can grow for the next 20 years and the competition among lunch-box companies will become fiercer,” said Hwang Sung-hwan, who works for Hansot.

Although the lunch-box market went through a stagnant period, it boomed again since the global financial crisis in 2008. In recent years, the increase in one-person households and working couples has become a catalyst for growth.

The trend of easy home meals is also cited as a factor in the growing popularity of lunch boxes, which can be cooked in a microwave.

The nation’s largest convenience store chain, CU, also saw sales of lunch boxes grow 40 to 50 percent over the past two or three years. Sales of lunch boxes for the first half of this year at CU increased 54.3 percent compared to the same period last year.

“We tried selling lunch boxes in the early 2000s, but sales were low. However, the lunch box market at convenience stores started growing in full swing since the global financial crisis,” said Yoon Hyung-sik, who works for CU.