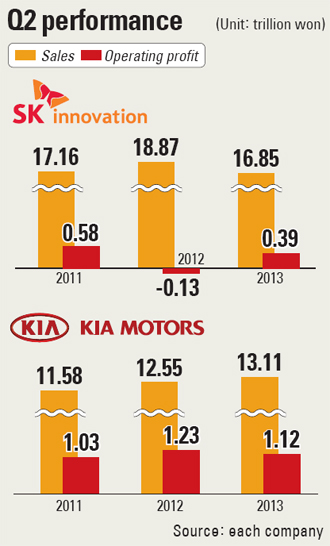 Major Korean companies yesterday reported less than impressive - but expected - second-quarter earnings as they expressed concerns about economic uncertainties in the remainder of this year.

SK Innovation, which controls companies like SK Energy, SK Lubricants and SK Petrochemical, reported that its second-quarter sales decreased 10.7 percent year-on-year to 16.85 trillion won ($15.16 billion). However, its operating profit was 395.5 billion won, a big turnaround from a 132.4 billion won loss a year ago.

Net profits also came to 271 billion won in the April-June period, compared with a net loss of 238.4 billion won a year ago, the company said.

Nonetheless, SK Innovation said it was concerned about its performance compared to the first quarter. The company said second -quarter revenue fell by 6.9 percent quarter-on-quarter mainly due to lower crude oil and petroleum prices, and maintenance at its oil refineries and petrochemical facilities.

SK Energy, nation’s top refiner, however, struggled with operating profit of 38.7 billion won, nearly a tenth of what it earned from January through March period.

“Although the company achieved a turnaround in operating profit year-on-year, the quarter-on-quarter performance was weaker due to the bearish market conditions and the depressed global economy,” said Cha Sung-keun, head of the finance office at SK Innovation.

Second-quarter reports by Hyundai Motor Group affiliates were mixed. Kia Motors took in 13.11 trillion won, up 4.5 percent from a year ago, while operating profits were down 8.5 percent year-on-year to 1.12 trillion won.

For the first half of the year, Kia had sales of 24.19 trillion won and operating profit of 1.83 trillion won, both down from a year ago.

Kia’s Chief Financial Officer Park Han-woo said yesterday the company will revise its sales goal in China from 500,000 to 530,000 units this year. He added that Kia’s third plant will start operation from next March of April.

“Wage bargaining with the labor union and market trend shifts by countries are factors to consider, but we expect our global sales to reach 2.8 million units, exceeding our original goal,” Park said. “In general, second-half performance is not better than the first half, but we will try to keep up our profitability.”

The car-module maker explained its operating profits were held back by initial costs for new factories in Turkey and Slovakia. Hyundai Mobis added that it also benefited from the Chinese market, where year-on-year sales increased 32.6 percent.

For the first half, the company reported revenue of 6.33 trillion won and 379.3 billion won in operating profit.

While the construction industry in general has been struggling with a moribund housing market and fierce competition overseas, Korea’s No.1 builder was able to post impressive earnings, saying it has been trying to reduce costs while reinforcing the profitability of its projects.