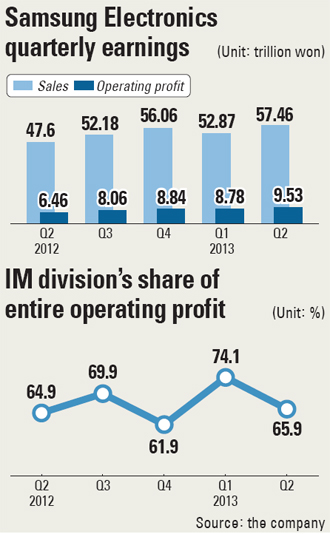 Samsung Electronics, announcing its second quarterly earnings results yesterday, tried to calm fears of stagnated growth by disclosing investment plans for the remainder of the year.

The earnings result was slightly better than levels shown in the guidance earlier this month, with Samsung posting record-high sales revenue of 57.4 trillion won ($51.7 billion) in the quarter ended June 30, up 47.5 percent from a year earlier, and 9.53 trillion won operating profit, a 6.46 percent year-on-year increase and the highest in history. But the operating profit is below the 10.16 trillion won estimate of analysts from 12 securities firms.

During the first half, the company’s sales revenue climbed 19 percent year-on-year to 110.33 trillion won and operating profit was up by 51 percent.

Hit by lower-than-expected sales of its flagship Galaxy S4 smartphone, Samsung saw operating profit in the IT & Mobile Communications division decrease 3 percent from the preceding quarter. Slow sales of the latest smartphone have recently ignited concerns that smartphones have reached a saturation point. Samsung heavily relies on the IM division, whose operating profit was 65.9 percent of the company’s total in the March-June period and as high as 74.1 percent in the previous three months.

Regarding repeated inquiries from analysts during the conference call over whether Samsung would shift its focus to mid-priced smartphones, Kim Hyun-joon, vice president of Samsung’s mobile business, made it clear the company would concentrate on high-margin premium phones “for the time being.”

He added that the smartphone market is expected to grow in the third quarter, which traditionally sees better sales than in the second, but the momentum is expected to slow. He said the world’s top smartphone producer will invest 24 trillion won on facilities this year, up more than 1 trillion from last year’s record 22.85 trillion won. The largest portion would go to semiconductors at 13 trillion won and 6.5 trillion won will be earmarked for display panels. In the first half of the year, 9 trillion was invested.

The facility investment plan was not made public until the conference call, with Samsung saying the budget will be “flexibly administered.” In past years, the company disclosed the plan at the beginning of the year.

Robert Yi, chief of Samsung’s investor relations team, said the company’s stock dividend will be unchanged at 500 won per share, ending speculation that the top market cap company would increase the dividend to as much as 5,000 won.

“Given the uncertainties in the market, we need sufficient capital resources for mergers and acquisitions, research and development, and facility investment,” he said. Samsung has in the past five years - except for 2010 - paid a mid-year dividend of 500 won per share.

The move contrasts with Apple, which announced in April it would increase its quarterly dividend to $3.05 per share.

“Experts say our shares are extremely undervalued despite our competitiveness and top-notch technologies,” said Yi, “Our management will consistently pay attention to share price movements and strive to step up competitiveness.”