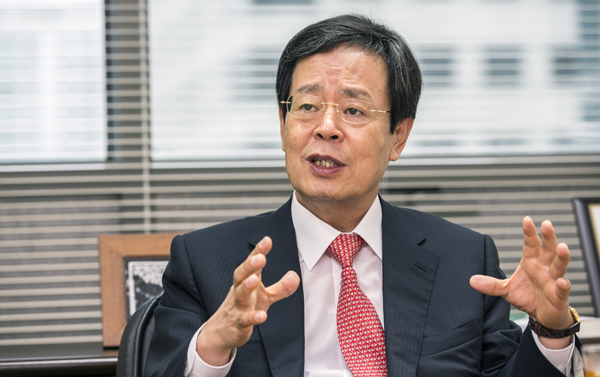 Mok Young-joon, a former justice of the Constitutional Court of Korea, heads the social contribution committee at Kim & Chang. By Cho Yong-chul

Mok Young-joon, former justice of the Constitutional Court of Korea, says that the public should not think too hard about Constitution amendments, but to consider them with flexibility.

Mok, who heads the social contribution committee at Kim & Chang, one of the nation’s leading law firms, has been emphasizing Constitution article 10, which states: “All citizens shall be assured of human worth and dignity and have the right to pursue happiness. It shall be the duty of the State to confirm and guarantee the fundamental and inviolable human rights of individuals.” He urges that current politics, economics and social problems be solved in a principle of law and with proper means.

Before joining Kim & Chang in May, Mok, 58, was a justice in the Constitutional Court of Korea from 2006 to 2012, and was a judge from 1983 to 2006. He was also a professor at the Judicial Research and Training Institute and a vice minister of the National Court Administration.

Q. Constitution amendment talks are looming in the National Assembly regarding the presidential system and terms. What do you think?

A. For Constitution amendments, politicians and the public should have some flexibility. For the case of the United States, it has been revising some of its problematic Constitution provisions continuously. Of course, frequent revision of the Constitution isn’t good for the nation’s credibility, but we don’t have to think too hard about changing some of the constitution’s provisions. The Constitution is a reflection of the spirit of the age. The system of direct election of the president was implemented after the constitutional amendment in 1988, but after 25 years, Koreans who live at this moment would probably have different opinions whether it is right for the current state. In my thoughts, we should vitalize the national referendum. If political parties disagree on certain issues, we should think about deciding it by referendum.

But a national referendum seems to cost a lot.

Costs coming from social and political conflicts will be much larger than tangible expenses occurred from a referendum.

From a legal perspective, how do you see the controversy over unveiling documents of the 2007 inter-Korean summit between then-president Roh Moo-hyun and North Korean leader Kim Jong-il?

We should first approach it in the perspective of the people’s right to know. The provision of the public’s right to know isn’t included in the Constitution, but considering that the Constitution states freedom of expression, we can see it as both sides of a coin. It can be accepted as a constitutional right, but we should also consider other constitutional values, such as privacy and defamation. In this case, we should also consider in terms of the governance of the nation. The public’s right to know could be limited during a process of ruling and managing the country. It will be best if there is a law or national consensus to define the level of limitation. If there is still a problem after the establishment of law, then we can also think about going through the process of getting a constitutional decision. But we need to admit that a legal guideline of any act will change after the situation of the time. For the controversy regarding the revealing of the document, it is interpreted as the traditional case of dissonance of constitutional values, so the current government and the former regime that is responsible for the issue need to pull out of the agreement.

What about the former National Intelligence Service chief asking employees to conduct online activities such as writing replies and threads in Web portals during last year’s presidential campaign? With the controversy of violating election laws, people are asking to reform the nation’s spy agency.

It’s not right for me to talk about former NIS head Won Sei-hoon since a court ruling is not finalized. But as a lawyer looking at the case theoretically, the freedom of political expression shall be guaranteed and that expression should affect the election because political expression has political purposes. The problem is there should be a judgment whether those online campaigns of posting replies have a purpose of criticism or slander. Posting replies should be treated differently depending on the purpose. If it is regarded as a criminal act like slander, that is a violation of election law. We should also think about public officials’ duty to be politically impartial as prescribed by the law.

What do you think about the nation’s welfare?

Social contribution and corporate social responsibility (CSR) are like concepts that maintain a capitalist system. Especially in a market economy when polarization gets deepened, it is difficult to maintain social orders. To reduce the polarization gap, we need welfare and a legal concept of welfare. It is important to create an atmosphere in which the private sector can cooperate.