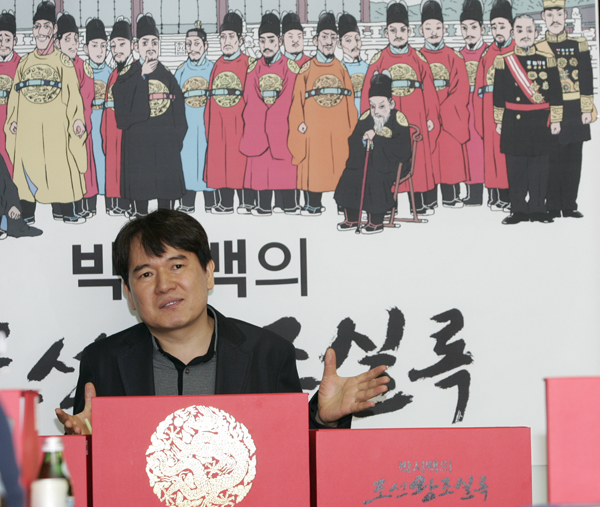 Cartoonist Park Si-baek said that he tried to stay true to real history while writing his series of books, rather than pursue entertaining elements. Provided by Humanist

Cartoonist Park Si-baek, 49, devoted 12 years to conceiving and transcribing the true history of the Joseon Dynasty (1392-1910) into a series of comic books, “The Annals of the Joseon Dynasty,” based on historical records of the same name, which were kept from 1413 to 1865, amounting to 2,077 volumes.

Park breathed life into the centuries-old history by drawing rich stories with vivid depictions of 500 historical people. Published by Humanist since July 2003, Park’s book series extends to 20 volumes over 10 years and contains 25,000 frames and 4,000 pages.

“I feel so great that I finally finished it, but a small part of me feels sorry,” Park said Monday at the publishing company, in central Seoul while celebrating the end of the long journey. Behind his back was a large picture he drew to mark the event, in which 27 Korean kings are standing in a row. The picture portrays the affection Park has for the kings with his lively depiction of them, from ambitious King Sejo to good-looking King Heonjong and bulky King Sejong.

“Most portraits of some of the kings were lost during wars, so I had to conjure up the images of some of them by reading stories related to them,” he said. “For example, I felt Yeonsangun might look like an immature delinquent boy, so I put a bandage on his face.”

From continuity to sketching and coloring, he worked alone and organized 121 notes he took while studying the history. The book series is much more faithful to the true history than the unofficial one.

“I used to pursue entertaining elements in half of the series, but I decided to deliver the history as it is, although it is not much fun,” Park said. “I found that even some of the well-known history books don’t tell the true history as depicted in ‘The Annals of the Joseon Dynasty.’ I hope my books could serve as a navigator to the true history.”

Park also found meaning in the way the annals were recorded and preserved.

Regarding the importance of keeping records, he addressed the issue of the whereabouts of a missing NLL transcript from the 2007 inter-Korean summit, “I think this is the time for us to think about the spirit of preservation and to honor the annals.”

Park drew satirical cartoons for the Hankyoreh, a daily newspaper, for five years from 1997.