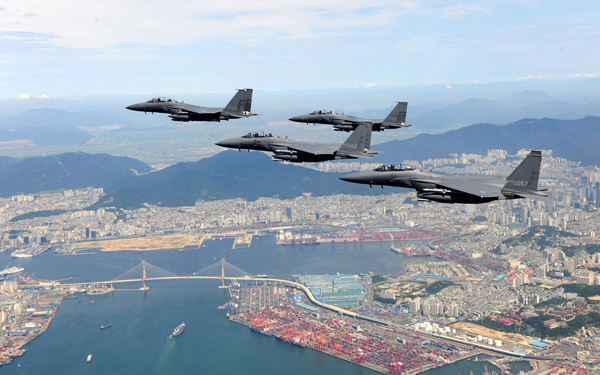 South Korea’s F-15K fleet flies over Busan yesterday in commemoration of the 60th anniversary of the signing of the armistice agreement that stopped the 1950-53 Korean War. The Air Force released photos of the jets flying over major battlefields around the nation.[NEWSIS]

Today marks the 60th anniversary of the armistice that ended the devastating 1950-53 Korean War, and the 21 nations of the United Nations forces are showing that they remember by holding events for veterans, setting up memorials and sending delegations to Korea.

Although it was once dubbed the Forgotten War as it fell between World War II and the Vietnam War, the memory of the Korean War lives on in the 16 countries that sent troops and the five that sent medical aid under the United Nations Command to fight on the side of South Korea.

The nations who deployed soldiers have a range of memorials and monuments to commemorate the sacrifices of their soldiers. Korea established the United Nations Memorial Cemetery in Busan under a 1955 UN resolution to honor the soldiers killed.

The United Kingdom, the only country out of the 16 allied nations without an official memorial in its capital, is set to dedicate a monument in London thanks to a donation from a Korean-born British viscountess.

After the North Korean People’s Army invaded the South on June 25, 1950, some 1.9 million people participated in the Korean War under the United Nations Command.

The United States, the United Kingdom, the Philippines, Thailand, Canada, Turkey, Australia, New Zealand, Ethiopia, Greece, France, Colombia, Belgium, South Africa, the Netherlands and Luxembourg deployed troops while Denmark, India, Italy, Norway and Sweden provided medical units. According to the Korean Ministry of Patriots and Veterans Affairs a total of 154,881 UN Command soldiers were killed in the war, and over 104,200 injured. 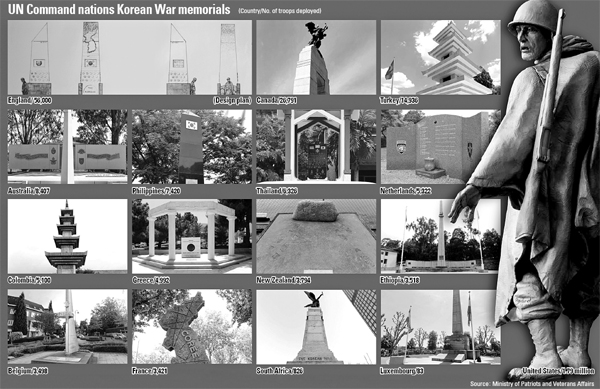 Earlier this month, hundreds of British Korean War veterans marched through London and held a thanksgiving service at Westminster Abbey.

Defense Minister Mark Francois said that he hoped the 60th anniversary will “be a fitting way for the nation to give thanks to both the veterans, and those who paid the ultimate price in a bitterly fought campaign.” The U.K. is holding a Korean War Commemoration Day today at the National Memorial Arboretum in Staffordshire, England.

The United Kingdom celebrates the armistice anniversary each year at the arboretum, which contains over 250 memorials to those who have fought for the country.

But a separate monument to the Korean War, designed by U.K. sculptor Philip Jackson, is in the works. It is to be built behind the Ministry of Defense by the River Thames. The groundbreaking ceremony will happen in November to coincide with President Park Geun-hye’s first England visit upon invitation from Queen Elizabeth II.

Surprisingly, though the United Kingdom sent the second largest number of troops (56,000) immediately after the war broke out, and 1,070 of them were killed in action, the country does not yet have an official memorial.

The Korean Embassy proposed a London-based memorial numerous times over the years but faced difficulty obtaining land in the bustling capital. There are also stringent administrative procedures to go through that require approval from the U.K.’s culture, environment and defense branches, as well as from the respective local governments.

But Dowager Viscountess Rothermere, Maiko Jeong Shun Lee, who is a Korean citizen, stepped in and donated 55,000 British pounds ($85,000) to finance the memorial with the support of the Korean government.

According to design plans obtained by the JoongAng Ilbo, the monument will be a 5.8-meter-tall trapezoid structure, with flags of the United Kingdom, South Korea and the United States on three of its sides. The front side will have a U.K. soldier with his head bent down, representing the respect for the sacrifices of the British troops during the war.

Park Joo-hyun, an official at the Korean Embassy in London, said, “We made an appeal on Oct. 1 last year on Armed Forces Day, but were surprised when she agreed on the spot. Not only did she donate funds but she helped out with the licensing process and the constructors.”

The viscountess said, “There was no need to think twice about a token of gratitude for those who sacrificed for my home country.”

Gold Coast, Queensland, is a major tourist city that attracts more than 10 million people each year.

One elderly man rested his hand on the bronze statue. He was visiting with his daughter-in-law and baby grandson, who was playing with a medal on his grandfather’s uniform.

Raymond Deed, 85, a 1950-53 Korean War veteran who participated in the Battle of Gapyeong (April 23-24, 1951), fought mainly alongside Australian, Canadian and British troops against the communist Chinese forces, eventually emerging victorious.

Deed said, “My birthday was the day immediately after the Battle of Gapyeong, on April 25. As I recall the deaths of my comrades, I have never celebrated by birthday since.”

Over 8,400 Australians fought in the war, according to the Korean government.

The Queensland Korean War Memorial was completed in 2011 and has commemorative murals honoring Australia’s military, a dedication plaque, and a new memorial wall in English and Korean.

A government ceremony in Cascade Garden in Gold Coast joins other allied nations in celebrating the 60th anniversary by honoring veterans and handing out peace medals.

The memorial was refurbished in 2006 and presents important figures from the war in a storytelling format. One animation tells 86-year-old Robert Parker’s experience as a prisoner of war. The Royal Australian Regiment private was captured during the Battle of Gapyeong by the Chinese.

Parker was returned at the end of the war among 100,000 prisoners exchanged in Operation Big Switch. His daughter relayed that her father, who suffers from Alzheimer’s, “leaves his experience of the Korean War as a record” as his final deed.

Michael Kelly, a historian at the Australian War Memorial, said, “History is not just left on paper but has to recall the feeling of that moment.”

Ahn Jong-cheol, head of the Korean War Memorial Committee there, said, “In order to raise awareness of the Korean War, we picked out a location that is accessible to many people from the start.

As the people of the city say, you can’t even buy this land for $30 million.” The committee program also runs a program called Gapyeong Peace Camp, which sends 70 to 80 young Australians to Korea each year.

A separate Australian National Korean War Memorial is located in a memorial section of the capital, Canberra, and was dedicated in 1999.

Today some 4,000 war veterans, government officials, allied delegates, and their families will attend a commemoration event at the War Memorial of Korea.

There were a flurry of events in Korea over the past week, including a peace concert at the Demilitarized Zone on Friday, visits to memorials, a film festival and a five-day General Assembly of the International Federation of Korean War Veterans Associations in Seoul, which concludes today.

Simultaneously, countries around the world also hold similar ceremonies at their Korean War memorial sites to celebrate the armistice agreement signed on July 27, 1953.

In Washington, President Barack Obama will address veterans at the Korean War Veterans Memorial, the first sitting U.S. president to do so.