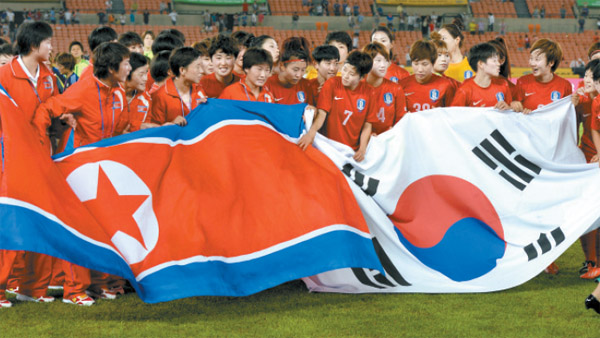 Members of the women’s football teams from both Koreas celebrate after North Korea won its first East Asian Cup title on Saturday. [NEWS1]

A South Korean lawmaker submitted a resolution urging the revival of a symbolic inter-Korean football friendly that provided a model for sports exchanges in the 1990s and early 2000s, after members of both Korean teams made a rare scene of mingling with each other during the Women’s East Asian Cup.

The North Koreans, who defeated China, 1-0, earlier Saturday, cheered for South Koreans in the stands during the South Korea-Japan match at Jamsil Olympic Stadium.

After the match, they ran onto the pitch and put their arms around the South Korean players to celebrate the South’s victory, which gave the North its first title in the four-nation tournament. Some players from both teams were seen shedding tears when they embraced each other. The unlikely reconciliatory mood on the football pitch amid dragging tension on the Korean Peninsula prompted An Min-suk of the Democratic Party to submit a resolution calling for the revival of the Gyeong-Pyong Football Match, the lawmaker said yesterday. The match, an annual derby between two teams based in Seoul and Pyongyang between 1929 and 1946, was revived in 1990 amid a political detente, resulting in two matches between the national teams to be held alternatively in the two capitals that year. That was followed by several rounds of sports exchanges between the two countries, culminating in fielding a unified team or marching under a joint flag during major international sports events in the 1990s the 2000s.

“It is difficult to have a breakthrough in this strained inter-Korean relationship only through politics and diplomacy. It is time when sports and cultural diplomacy can play a positive role,” An said.

“We need to be reminded of the significance of an inter-Korean football match during the Women’s East Asian Cup. The reconciliatory mood triggered by the East Asian Cup should continue.”

An told Ilgan Sports that he recently received a nod from North Korea and Seoul Mayor Park Won-soon regarding the revival of Gyeong-Pyong derby. He did not elaborate on which North Korean agency or person he was in contact with. “I will do my best in getting the Gyeong-Pyong match revived during the 19th session of the National Assembly,” An said.

North Korea deserves its own credit for winning the East Asian Cup title. The country ranked ninth by FIFA held third-ranked Japan to a scoreless draw on Thursday, snapping Japan’s winning streak at the East Asian Cup at seven games. The North, which beat the South, 2-1, on July 21, beat China on Ri Un-hyang’s winner. The North was the only country that came through the preliminaries - South Korea, Japan and China are the fixture members of the tournament.