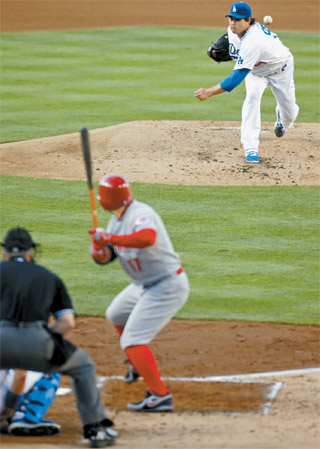 Ryu Hyun-jin of the Los Angeles Dodgers pitches against Choo Shin-soo of the Cincinnati Reds in the third inning at Dodger Stadium, yesterday in Korean time. In the first duel between the two Koreans, Choo walked, grounded out and struck out. Ryu struck out nine batters over seven innings to earn his ninth victory. [NEWS1]

“I grew up in L.A. going to Dodger games, so I’ve always thought about hitting a home run in Dodger Stadium - and actually doing it is pretty incredible,” Schumaker said. “It’s kind of a surreal feeling. I get lucky every now and then. Every 200 at-bats or so, I run into one.”

Ryu (9-3) had nine strikeouts, all in a span of 13 batters. The first came against Joey Votto, who took a called third strike after Chris Heisey hit his first triple of the season with two out in the third. Cincinnati’s run came on a homer by Jay Bruce in the second.

The Dodgers increased their NL West lead to one and a half games over Arizona.

Ryu faced Korean countryman Choo Shin-soo for the first time in the major leagues. The Reds’ center fielder walked, grounded out to first base and struck out.

“I’m sure Choo was on his mind,” catcher A.J. Ellis said. “I mean, it’s a big deal. Choo is one of his best friends and one of his baseball idols. So with him facing him in America in an atmosphere like this, and also playing in front of a huge TV audience back in Korea, it’s pretty neat to know you’re a part of that. It was really cool to see those guys match up. You could hear the crowd on every pitch and every swing.”

Kenley Jansen got the last three outs for his 14th save. 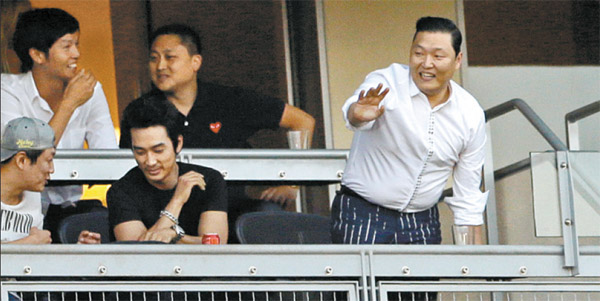 Korean singer Psy waves as his hit “Gangnam Style” is played at a game between the Cincinnati Reds and Los Angeles Dodgers in Los Angeles, Saturday. Psy was cheering for two Korean players, Ryu Hyun-jin of the Dodgers and Choo Shin-soo of the Reds. Sitting next to him is hallyu star Song Seung-heon. [AP/NEWSIS]

Crawford, who singled his first three times up in the Dodgers’ 2-1 victory Friday night and then made a brief visit to an emergency room on Saturday to get checked on for a high temperature and fever, was held out of the lineup. Manager Don Mattingly replaced him with Schumaker, who came in with more plate appearances (53) and hits (18) against Reds starter Bronson Arroyo than anyone else on Los Angeles’ roster.

“It’s a good feeling when you have a situation like today where Carl wasn’t able to play and Skip can step in and be a more than capable guy,” Dodgers first baseman Adrian Gonzalez said. “He’s a great veteran who battles every at-bat. That’s what this team is built upon - experience on the bench, experience on the field. And hopefully we’ll take that all the way through.”

Schumaker came through in the fifth, driving Arroyo’s 1-0 pitch to center field for his second home run of the season and a 3-1 Dodgers lead after a leadoff single by Mark Ellis.

“If you look at the numbers, it says I have some hits off him. But a lot of those were bloop hits, lucky hits and not too many were squared up,” said Schumaker, who also doubled in the seventh inning and scored the Dodgers’ fourth run on a two-out single by Gonzalez.

It was the 300th home run given up by Arroyo (9-8), including a career-high and major league-worst 46 in 2011. The 14-year right-hander was charged with three runs and eight hits in five and one-third innings, after going 4-0 with a 2.30 ERA in his previous six starts against Los Angeles. He was coming off a complete-game 11-0 victory at San Francisco on Monday.

The Dodgers got a run in the first on a two-out double by Hanley Ramirez after Yasiel Puig walked, advanced on a flyout and stole third without a throw. But the Reds tied it in the second when Bruce drove Ryu’s 2-0 pitch into the right field pavilion for his 22nd home run. Since the start of the 2010 season, Bruce leads all left-handed batters with 42 homers against lefty pitchers - including eight this season.

“I think it’s helped him being around Joey Votto, and seeing how Joey hits lefties,” manager Dusty Baker said. “Most guys, I think, have trouble with lefties because they don’t see them (enough). I mean, it’s hard enough to find a right-handed batting practice pitcher that can throw strikes - and it’s almost impossible to find a lefty to do it. But we’ve got two of them - Mark Berry and Ronnie Ortegon. And we always travel with one, so I think that helps a lot.

“That’s something that Barry Bonds always did in San Francisco,” added Baker, who watched Bonds homer 125 times against lefties during the 10 seasons he managed baseball’s career home run leader. “We always had a left-hander throwing to Barry in batting practice. So I took a page out of Barry’s book, and I’d like to give Barry credit for that.”

Bruce, the Reds’ right fielder, also threw out Puig at first base in the fifth after the overaggressive rookie made a wide turn on his single toward the line. The play immediately followed Schumaker’s homer.

In Thursday night’s series opener, Puig made a similar wide turn around first on a single to center and ended up at third base after Choo threw the ball past first baseman Votto and the ball ended up in the stands for a two-base error.