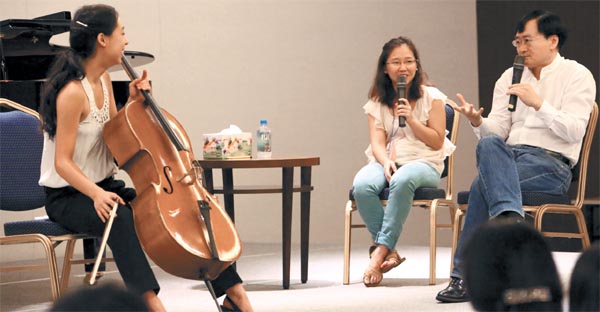 Jean Kim, left, who will be going to the Curtis Institute of Music in Philadelphia in the fall, plays Hayden’s “Cello Concerto No. 2 in D Major” during a cello master class with Jian Wang, right, at the Great Mountains Music Festival and School on Friday in Pyeongchang, Gangwon.Provided by the organizer

PYEONGCHANG, Gangwon - Dozens of young students, each carrying their own musical instruments, rushed into different buildings at a ski resort here on Friday morning. The scene may look strange to Seoulites but to Gangwon residents, international crowds swarming into a snowless ski resort every summer for the annual Great Mountains Music Festival and School (GMMFS) has been a familiar scene.

To mark the festival’s 10th anniversary, classical music has been resonating from the Alpensia Resort as well as other venues around Gangwon since Thursday. The festival and school runs to Aug. 4.

Inside the Pyeongchang Hall of the Alpensia Resort at 11 a.m. on Friday, three students waited to receive a lesson from renowned cellist Jian Wang, 45, as part of the festival’s master class program. Other students who registered for the school can watch the classes.

As Cheng pulled it off perfectly, Wang gave him a pleasing look and added, “I recently went to watch a dance performance and discovered something new. Right away I noticed that some dancers were better than the others. I spent the whole performance trying to figure out why they were better than the others. And then I realized that although they were all doing the same gestures, the good ones knew how to connect the gestures. It’s not the gestures that were making the difference. It’s how you connect the gestures. That made all the difference.”

For two other students from China and Korea, Wang gave them advice and tips with compliments that focused a lot on emotions.

“This is a tragic piece. You brought the sadness very well but it wasn’t complex enough. You sound like a very good man complaining about his problems. Imagine your parents passed away. There will be sadness but there’ll also be complex feelings such as anger and guilt. You’ll also regret that you could’ve been nicer to them,” Wang told Peiyao Guo, who played Elgar’s “Cello Concerto in E Minor.”

After the class, Cheng, who came to the festival last year as well, said the class was really helpful even though it was the first time they met.

“I’ve been to many music schools around the world but this is one of my favorite. I like the whole atmosphere and the surroundings,” said Cheng.

“The whole experience is different. Here, you get to eat with the faculty and chat with different people around the world who have the same interests.”

According to the two directors, cellist Chung Myung-wha and violinist Chung Kyung-wha, “the educational aspect has been the major objective of the festival.”

“As a young music student, I remember attending a summer music camp in the U.S. with my sister. It was such a great time that I still remember it vividly,” said Chung Myung-wha.

“I want Korean students to take advantage of the opportunities to learn from world-renowned teachers from abroad through Gmmfs.”