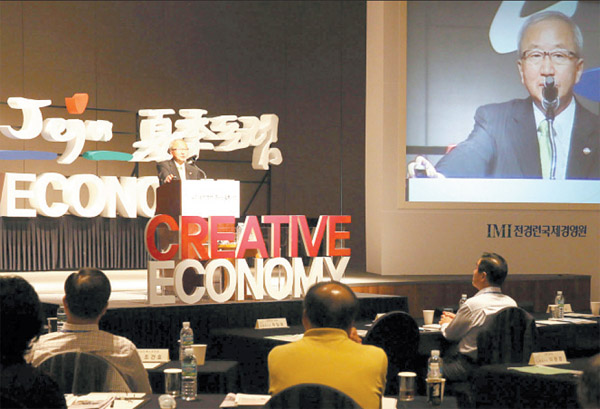 Finance Minister Hyun Oh-seok talks about his plan to ease regulations on businesses at a forum in Jeju on Saturday. Provided by the ministry

Finance Minister Hyun Oh-seok has reaffirmed his plan to focus on easing regulations on businesses to help boost the nation’s economic growth at a forum held in Jeju over the weekend.?

Hyun said he will ease tax restrictions for companies that allocate a lot of work to affiliates and therefore increase internal business transactions. Small and midsize companies are not the only ones that are to benefit from the changes, but also leading conglomerates.

Since taking office in February, the Park Geun-hye administration has been pushing for so-called “economic democratization.” As part of these efforts, it has been clamping down on leading conglomerates excessively allocating work to their own affiliates. Such practices were believed to hurt competition and damage the small enterprise sector. It’s also been deemed to be profiteering by the owning families.

Hard-line investigations and tax audits put pressure on many conglomerates, and some said they ran counter to the government’s efforts to bolster the economy. To help increase growth, the Park administration pushed for a 17 trillion won ($15.3 billion) supplementary budget that was accepted by the National Assembly in May. Since then, the government has raised its economic outlook for this year from 2.3 percent to 2.7 percent.

Up until last week, when the Bank of Korea announced that the economy had expanded 1.1 percent in the second quarter, breaking the 1 percent mark for the first time in two years, there were growing complaints that strengthened investigations were hurting business activities. But with the boost in confidence that came from the recent growth report, Hyun assured the business community that the government would ease regulations.

“In the second half, the Ministry of Strategy and Finance will focus on stimulating the economy by supporting business activities,” Hyun said at the?Jeju Summer Forum, held by the Federation of Korean Industries on Jeju Island on Saturday. “As?companies are increasingly burdened by the taxation on internal transactions and work allocated on affiliates, the ministry will examine the mitigating factors and reflect them in the tax revision plan.”

A week earlier, he said he would make sure the economic democratization policies and audits wouldn’t discourage business activities.

According to Hyun, the finance ministry is seeking to create more ways for large corporations to get out of charges on internal transactions between affiliates and also to complement the taxation requirements to ease the tax burden on small and medium businesses.