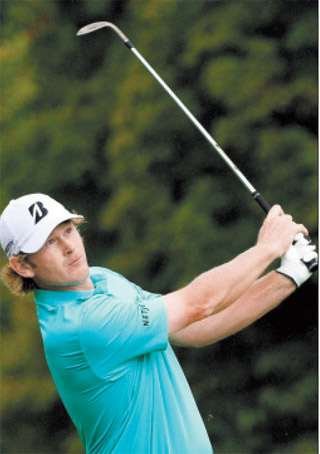 OAKVILLE, Ontario ? Brandt Snedeker was on the seventh tee when he noticed something wasn’t quite right.

He couldn’t find Hunter Mahan’s name at the top of the Canadian Open leaderboard.

“I looked at my caddie, and I go, ‘What’s going on?”’ Snedeker said. “He goes, ‘I think Hunter had to leave because (his wife) went into labor.”’

His caddie was right.

Mahan, the second-round leader at 13 under, withdrew Saturday to rush home to Dallas for the birth of his first child, leaving a big opening for Snedeker.

“Kind of left the tournament wide open,” Snedeker said. “Hunter was going to be hard to catch because he was playing so good. The way he drives the golf ball on this golf course, he was going to play really well on the weekend. For me to catch him, I knew I was going to have to shoot something really low.”

Snedeker had a 9-under 63 at rainy Glen Abbey to take the lead after the third round. He won the Pebble Beach National Pro-Am in February for his fifth PGA Tour victory.

“I know how to handle it and I know what to expect tomorrow, especially on a golf course like this,” Snedeker said. “I’m not too concerned about my number right now. I know what I have to do tomorrow.”

The 2012 FedExCup champion had nine birdies in a bogey-free round, playing the front nine in 6-under 29.

“You always feel like you’re exactly one swing away from hitting something off the planet or something like that,” Snedeker said. “I felt like I managed my game really well today.”

Mahan withdrew before he was scheduled to tee off Saturday in the round that was delayed 80 minutes because of lightning.

“I received exciting news a short time ago that my wife, Kandi, has gone into labor with our first child,” Mahan said in a statement. “Kandi and I are thrilled about the addition to the Mahan family and we look forward to returning to the RBC Canadian Open in the coming years.”

Sweden’s David Lingmerth was a stroke back after a 65, and Matt Kuchar and Jason Bohn were 12 under. Kuchar had a 64, and Bohn shot 66.

“The birth of a child is a truly magical, special thing. You may get it once in your lifetime. It just doesn’t happen that often,” Kuchar said. “Hunter right now is playing some of the best golf in the world. It kind of gives the rest of us a chance with him not in the field.”

Dustin Johnson also shot 63, good for a tie for fifth at 11 under with John Merrick (72), Greg Owen (67), Charley Hoffman (67) and Kyle Stanley (66). Merrick, two strokes behind Mahan on Friday after matching the course record with a second-round 62, played alone in the third round after Mahan withdrew. Merrick declined to play off alongside a non-scoring marker.

David Hearn was the top Canadian, shooting a 68 to reach 5 under. He made the cut Friday by birdieing his final three holes.

“I felt good yesterday finishing the way I did,” Hearn said. “I didn’t play my best getting to the weekend, but it’s a pretty tight leaderboard.”