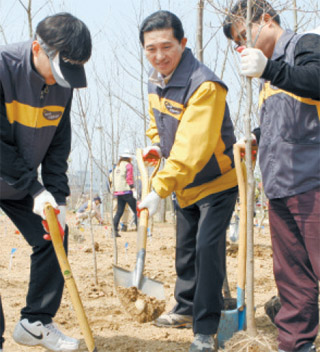 At the KB Star Economy and Finance Class, launched in February last year, children and teenagers jump into a mock economic system as product manufacturers. They created a store, brought homemade products and generated income with fake money. This helps them to picking up the ABCs of capital management.

A further Saturday program encompasses all groups of people under a collaborative system including the group’s retirees, subsidiary companies and CSR foundation.

In order to go beyond simple donation to charities, the group aims for a sustainable social contribution through two signature programs on education and environment.

This year, the group plans a camp that embraces not just children and teenagers but elderly people who are vulnerable to voice phishing fraud, as well as retired soldiers in need of a financial plan for the future. Their goal is to expand the economy-finance training to 100,000 people by the end of year.

Another social value KB believes in is environment. It especially cares about climate change and carbon reduction, therefore it began planting trees back in 2009 as an effort to counteract climate change. The group planted 11,000 trees in Incheon Free Economic Zone in collaboration with the city government and famous civic group, Forest for Life.

With the current chairman and CEO Lim Young-rok present, the employees and local residents gathered on April 17 to pledge their cause. The so-called KB Carbon Neutral Forest project aims to offset carbon dioxide emitted from corporate and daily life activities by planting the corresponding number of trees.

“Our forest is meaningful in raising awareness about the magnitude of climate change, therefore, contributing to a social change,” a KB official said. “We will stand on the frontline in carbon reduction movement through more environment campaigns. That is a green management.”

A first in Korea’s financial circle, KB constructed its own carbon emission management system in 2009.