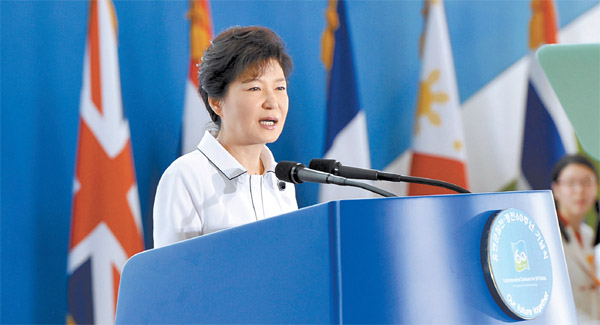 South Korean President Park Geun-hye delivers a speech at a ceremony marking the 60th anniversary of the Korean War armistice in Seoul on Saturday.[REUTERS/NEWS1]

Both Koreas, along with many other countries around the world, held ceremonies on Saturday to commemorate the 60th anniversary of the end of the 1950-53 Korean War, but the events in Seoul and Pyongyang were drastically different in their messages. While South Korea promoted the spirit of peace and hope for the future, the North hosted a massive military parade and urged its people to defend the peace with arms.

President Park Geun-hye pledged to continue working with the international community for ultimate peace and a denuclearized North.

At a ceremony at Seoul’s War Memorial of Korea attended by delegations from 27 countries, Park addressed the ongoing tensions on the peninsula, saying, “In the last 60 years, an uneasy peace has been maintained on the Korean Peninsula, with the world’s longest ceasefire.

“I will not accept any provocations that threaten the lives and property of our people,” she said, adding she would work closely with the international community to ensure a strong deterrence against North Korea.

“North Korea has to give up its nuclear weapons now and change, so that it can be responsible for the freedom and livelihood of its people.”

The United Nations Command sent more than 1.78 million people to fight on the side of South Korea, and saw more than 150,000 casualties in the war. 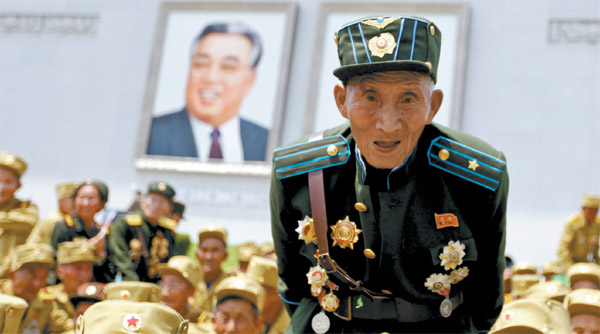 A Korean War veteran stands in front of a giant portrait of late North Korean leader Kim Il Sung in Pyongyang after a military parade to mark the anniversary on Saturday.[REUTERS/NEWS1]

Park said the 60th anniversary of the armistice that ended the war is a day not only to express gratitude and honor the war dead, but also to look to the future.

“Our people faced despair and stepped up again,” she said.

Park conveyed her vision for an international peace park inside the demilitarized zone that currently divides the two Koreas. She said it was created with the armistice agreement on June 27, 1953, to keep peace, “But different from its name, it has become a region that is more heavily armed than any other place in the world.”

Pyongyang celebrated the anniversary, which is known as “Victory Day” there, with a large-scale military parade. Leader Kim Jong-un did not make a speech at the event, but Choe Ryong-Hae, the director of the Korean People’s Army politburo, gave a 15-minute address.

He said North Koreans must remain ready for another war if they want peace. “All soldiers and citizens of the North must remember that peace only comes on top of guns and spears,” he said. “And we must stay combat-ready to counter any invasion.”

President Barack Obama gave an address to some 5,000 spectators at an official commemoration ceremony at the Korean War Veterans Memorial in Washington. 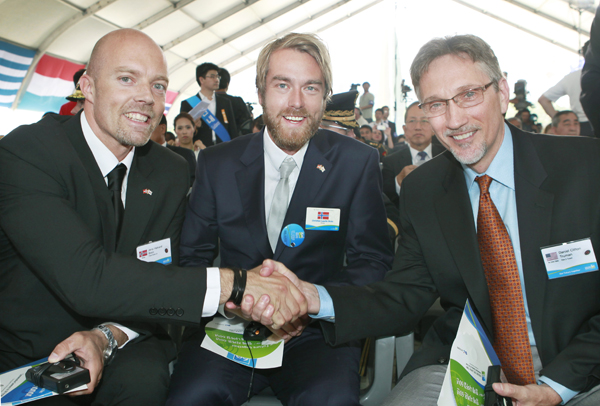 “Here today, we can say with confidence that war was no tie,” he said. “That war was a victory.”

The event was attended by Defense Secretary Chuck Hagel, a Korean delegation led by Saenuri Party representative Kim Jong-hoon, a special envoy of President Park, and veterans of the war. Some 4,000 war veterans, government officials, students and press gathered at the Seoul event.

Charles Schultz, an 84-year-old war veteran, came as part of the Australian delegation. It was his first time returning to Korea since the war. He was accompanied by his wife, Monica, whom he has been married to for 64 years.

“She was devastated when I was deployed for war,” said Schultz, “But it was the letters that kept me going. I told her I loved her and how wonderful she was, and how lucky I was to have her waiting when I came back.”

Australia deployed more than 8,400 troops and more than 1,500 were killed or wounded in the conflict. Schultz was in the navy, and aboard a ship for most of the war. “But when we sailed in, I went ashore with seven other sailors, and we were driven to Seoul. And we saw how devastated it was.” His eyes were shielded by sunglasses, but he cringed as he choked back a sob. He trailed off into a moment of silence.

The Ministry of Veterans and Patriots Affairs invited the 21 UN command nations who sent troops and medical aid, as well as the five countries of the Neutral Nations Supervisory Commission, and Ireland. The delegations participated in various activities including a Blue House luncheon, a peace concert at the demilitarized zone on Friday and a trip to the UN Memorial Cemetery in Busan yesterday.

“I was only 21, just a boy, and didn’t know anything. I was frightened, I was scared,” Schultz recalls. “But what it means to me personally now is that the Republic of Korea is safe and democratic.”

Homer James Mead, 78, was a part of a veteran group from Washington. He was also returning for the first time. He patrolled Korean waters in the aftermath of the war. “If detected, we were told we were to have a life expectancy of three minutes,” he said.

At the outbreak of the Korean War, when the North invaded the South on June 25, 1950, U.S. President Harry Truman (1884-1972) immediately sent in troops without waiting for approval from Congress.

Truman’s grandson, Clifton Truman Daniel, 56, said he is proud of his grandfather “for reacting as fast as he did,” saying. Daniel, an author and former journalist who was invited by the South Korean government as a special guest on behalf of his grandfather, said, “It’s wonderful to be here and to see that the decision has led to so much prosperity and so much happiness.

“The idea was to stop the North from pushing their way of life on the South, from taking over. I don’t know whether he considered this a win. I went to the DMZ yesterday, and people are still staring at each other over barbed wire. It’s very unresolved.”

He said that he hoped the two Koreas could reunify some day, as the “sense of longing I get from Koreans to repair the country is much more than I expected.

“It’s hard to qualify what’s a win in this situation,” said Daniel. “Yet what you’ve done in the Republic of Korea, the way of life, is a win.”

In the South, special invitations to the ceremony and President Park’s luncheon were also extended to Jens Halvard and Christian Lavritz Bratz, the great-grandsons of Trygve Lie, the secretary general of the United Nations, and Kriangsak Chomanan, son of former Thai Prime Minister Pongphiphat Chomanan.

“We know it was a controversial decision made at that time, but when we participate now, that’s especially meaningful for us,” Jens, 34, an attorney, said of his grandfather’s efforts to send UN troops to the war. “Sometimes he was controversial and sometimes criticized for being hard-lined, but now we see the result, he would have been proud.”

Jens said that they told President Park that their great-grandfather would have been “honored and impressed at the work that has been done in Korea in such a short time.”

Noeleen Heyzer, executive secretary of the UN Economic and Social Commission for Asia and the Pacific, delivered a message from UN Secretary General Ban Ki-moon that said, “Restarting credible dialogue and meaningful engagement should be the first step to overcome the current standoff towards a permanent resolution of the Korean conflict.”

In the United States, Obama proclaimed July 27 as National Korean War Veterans Armistice Day. The U.S. deployed some 1.7 million troops, more than all the other countries combined. More than 36,000 were killed.

He told the Korean War veterans that they “deserve better” and recalled the “torment” of more than 4,440 prisoners of war, “some of the strongest men our nation has produced.”

“When 50 million South Koreans live in freedom, a vibrant democracy, one of the world’s most dynamic economies - in stark contrast to the repression and poverty of the North - that is a victory and that is your legacy.” It was the first time a U.S. president attended an official Korean War Armistice Day celebration.

The Pentagon arranged a week of activities including a U.S. Marine Corps parade and a dedication ceremony on Friday for a memorial statue of Staff Sgt. Reckless, a Mongolian mare that served in the U.S. Marine Corps and was awarded two Purple Hearts.

South Korean war veteran Kang Eun, 85, was involved in the distribution of food and fuel from the U.S. Army. “I will always remember the gratefulness I have for the U.S. Army because if it weren’t for their support, South Korea would have starved. Youths today do not know history well enough - criticizing the United States is like criticizing the parent that raised us.”