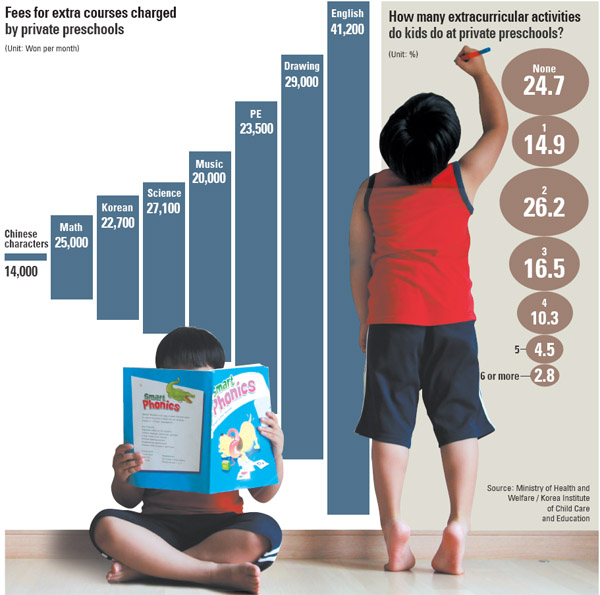 In March 2012, Mrs. Jung enrolled her five-year-old daughter in a private preschool a half-hour drive from her house in Seocho District, southern Seoul.

It wan’t her first or even second choice. Jung, a 38-year-old working mother, had tried to get her daughter into closer preschools but admission was done by lottery, and she lost.

The school was so far away that the school bus route didn’t reach Jung’s neighborhood. For a year, she drove her daughter to school on the way to work and hired a nanny to pick her up at 2 p.m.

“It was just too much spending over an hour giving my daughter a ride to and from the kindergarten,” said Jung. After a year, she decided to do something about the situation. She packed up the family and moved closer to the preschool.

Korea has a major problem with preschools. It has the lowest number of public preschools for children aged three to five in the Organization for Economic Cooperation and Development, or OECD. Even when you add in private preschools, which can be expensive, the demand greatly outstrips the supply.

The result is a large number of toddlers going to day care centers instead of preschools, very much a less desirable option for education-obsessed Korean families.

There’s a saying among young mothers that getting their kids into a public kindergarten is harder than getting them into college.

According to a 2012 OECD study, Korea ranked at the bottom for its percentage of children between three and five enrolled in public kindergartens with only 17.2 percent, less than one-third of the average for OECD countries of 62.7 percent.

Last year, public preschools taught 127,347 students, only 9 percent of the 1.4 million kids aged between three and five. If you add in private preschool places, the total is 613,000, or 43.5 percent of all children. The rest attend day care centers.

The problem is more acute in certain cities. Only 8.1 percent of young children in Busan were enrolled in public kindergartens, followed by Daegu with 1.1 percent. Seoul was closer to the average with 12.5 percent. Mrs. Park, a 43-year-old working mom, was lucky when her five-year-old was accepted at a public kindergarten.

“I did consider private kindergartens,” she says. “But there were rampant rumors that managers of private kindergartens prioritize profits rather than the quality of the education. If I hadn’t gotten an admission slot in a public kindergarten, I might have had to quit my job and concentrate on teaching my son at home.”

It’s not easy for the government to open more public preschools because of budget constraints and fierce objections from private preschools. Over the last year, 91 private kindergartens were opened while only 23 new public ones opened their doors.

In his inaugural speech in July 2010, Kwak No-hyun, former superintendent of the Seoul Metropolitan Office of Education, pledged to build at least one public kindergarten in each of the city’s 424 neighborhoods. But during his two-year stint as education chief, Kwak was only able to open 19.

“Education officials must step up their efforts to make sure private kindergartens are run in a transparent way while raising the portion of public kindergartens to the 30 percent mark,” said Jang Myung-rim, director of the policy-management team at the Korea Institute of Child Care and Education.

There’s a basic reason parents are so desperate to get their kids into public preschools: The private ones are very pricey.

Last year, the average yearly cost to send a child to a private preschool was 5.43 million won ($48,792), according to the Ministry of Education, more than the average annual tuition at a public university, which is 4.15 million won.

According to a survey of 774 parents of pre-school children conducted by the Ministry of Health and Welfare and the Korea Institute of Child Care and Education, 56.8 percent of respondents said high preschool fees were a burden.

To help out, the government gives a subsidy of 220,000 won a month to each household with a child aged between three and five, including those families lucky enough to get places in public preschools. But that doesn’t cover the basic tuition at private preschools, not to mention extra-curricular programs.

Many parents see the extra fees as profit engines for such schools.

Mrs. Ha, a 36-year-old working mother in Songpa District, southern Seoul, says she was coerced to sign up for an extra-curricular class because a teacher told her every other mother had paid for the program. “I felt I had no choice,” she recalls.

But under current law, the government lacks the authority to place a limit on tuitions for private preschools.

“As the government is poised to increase its subsidy program for early childhood education, it should be able to demand private kindergartens be more transparent and take more public responsibility,” said Professor Park Eun-hye of the Department of Early Childhood Education at Ewha Womans University.