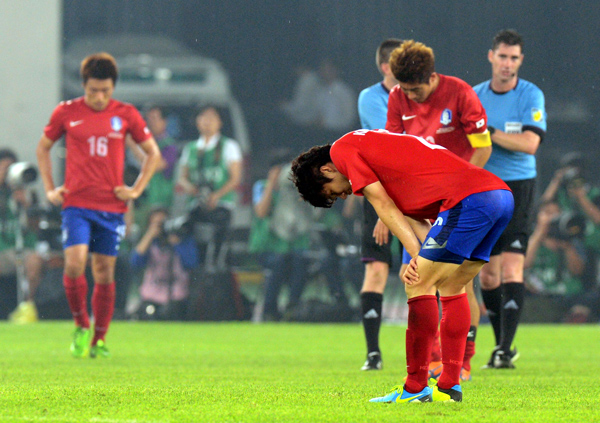 Hong Myung-bo wrapped up his debut event without a win, but the Korean national football coach refused to be glum, praising his team for their industrious efforts against Japan.

Korea lost to Japan, 2-1, at Jamsil Olympic Stadium in Seoul on Sunday, finishing third in the East Asian Cup, its worst standing in the four-nation tournament since a last-place finish in 2005.

Yoichiro Kakitani dented Hong’s confidence in what otherwise could have been a tight defense as the 23-year-old striker converted two surprising counterattacks into goals. Korea was ahead in ball possession, but failed to turn most of its chances into a threat except for Yun Il-lok’s first-half equalizer. It was the only goal scored by Korea since the former Olympic coach took over from Choi Kang-hee with a promise to impress the world with Korean-style football.

Korea’s chronic lack of a finishing touch was confirmed in Hong’s test of young players, who squandered 44 shots during the nine-day East Asian Cup. With two draws and a loss, Korea finished behind China, who beat Australia, 4-3, on Sunday. Australia finished last with two losses including a 3-2 loss to Japan on Thursday.

The loss to Japan was particularly disappointing for Korean fans, who wanted to see Hong’s magic that lifted his Olympic team over Japan for a bronze medal in London last year to continue with the senior side.

“It does not feel good to lose to a rival,” Hong said after Korea lost to Japan in their first duel in 13 years at Jamsil. Korea has dominated its East Asian arch-rival, with 40 victories against 13 losses and 22 draws ever since its national teams played against each other, but the loss on Sunday puts it in balance with four victories, four losses and six draws since 2000.

Hong started Kim Dong-sub as a sole striker against Japan, but the Seongnam Chunma forward struggled to break down the solid defense of the Alberto Zaccheroni side as he did against Australia on July 20. Alongside Yun, Go Yo-han, Lee Seung-gi, Ha Dae-sung and Lee Myung-joo backed up in the midfield to feed a chance to Kim, but Kakitani took them by surprise as he beat the offside trap and connected a long pass into the net in the 25th minute.

Yun leveled the score with a mid-range right-footer in the 33rd minute, the first goal in a Taegeuk uniform for the 21-year-old FC Seoul midfielder, but after a tedious second-half rally between the two teams, Kakitani capitalized on a crowded box before Korea to score about a minute into the second injury time.

Hong defended his players, saying they did their best in the Japan match. “I don’t know how the people would think, but I would like to applaud the players for their efforts,” Hong said.

His players echoed their coach.

“We had a good play, but the result was not good and I’m sorry for that,” said goalie Jung Sung-ryong, who kept Korea’s post at all three games during the East Asian Cup.

Jung said that he believes his team is on a learning curve in the run-up to the 2014 Brazil World Cup.

“We learnt much while playing this event,” he said.

Ha, who assumed captaincy of Hong’s squad against Japan, said that the national team has become more organized since Hong took charge. The communication among the team members also improved, he said. “We will get ourselves well prepared in the remaining time and will show our improvement,” Ha said.

Hong said that the East Asian Cup helped him learn the merits and shortcomings of each of his players.

“I will have to think about with which players and with which strategies we should get prepared for the next games,” Hong said.

Hong will announce a new roster ahead of a friendly match with Peru on Aug. 14 and summon the team on Aug. 12.