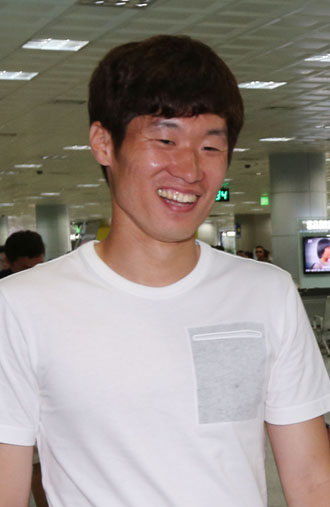 The Daily Mail reported that Park would take a physical at the Dutch club over the weekend. It said Park would sign a season-long loan with his old club, expecting the deal to be finalized on Monday.

Earlier, Dutch media outlets reported that the Queens Park Rangers midfielder would arrive at Eindhoven for a physical on Sunday in local time, envisaging his imminent comeback after eight years.

Park, 32, who rose to stardom with his contribution for the semifinalists of the 2002 FIFA World Cup, followed his mentor, Guus Hiddink, to the Dutch club in January 2003. Park stayed with Eindhoven for two years and five months and had a stellar stint there, including playing in the semifinals of the UEFA Champions League in the 2004-05 season. He had 17 goals and 10 assists in 91 matches, a performance that served as a stepping-stone for his move to Manchester United in 2005.

Park moved to QPR ahead of the 2012-13 season, but struggled to secure his place with the west London side, particularly since Harry Redknapp took its helm. QPR got demoted after a last-place finish, and Park was known to have been searching for a new team, although he said he prefers staying in Europe. Redknapp has sought to strengthen his midfield, and last week QPR signed a two-year deal with Karl Henry, 30, of the Wolverhampton Wanderers.

Under the deal with QPR, Park must play for the English club until June 2014. Many Korean media outlets also reported that Park will move on a year-long loan. His salary at Eindhoven is reportedly to be set between 2.5 billion and 3.5 billion won.

The Dutch media outlet, Voetbalzone, said that PSV hopes to put Park on the roster against Zulte Waregem.