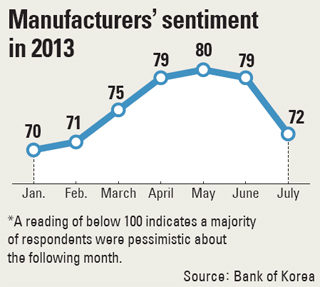 Despite an unexpected upswing in second-quarter growth, doubts remain about whether the momentum will continue for the remainder of the year and reach the government’s target growth of 2.7 percent.

Korean manufacturers were pessimistic about business conditions in July, a survey by the Bank of Korea showed yesterday.

An index reading below 100 means companies that expect business conditions to deteriorate outnumber those that see improvement.

“The reason the index was low is because exports as well as the domestic market didn’t increase as much as companies had expected at the beginning of the year,” said a central bank official.

The latest survey of 1,500 manufacturers was completed before the Bank of Korea reported on Thursday that the economy in the second quarter grew a faster-than-expected 1.1 percent compared with the January-March period. The market was projecting a 0.8-0.9 percent quarterly growth. Moody’s even speculated the economy might slow by as much as half a percentage point.

The sharpest quarterly growth in two years has given more confidence to the government, which has repeatedly stressed its effort to sustain the growth momentum.

However, doubts still linger mostly because second-quarter growth was largely the result of increased government spending.

In May, the National Assembly passed the government’s 17 trillion won ($15.3 billion) supplementary budget to bolstering the sagging economy, and the central bank lowered its benchmark lending rate 2.75 percent to 2.5 percent.

While the domestic economy seems to be on a recovery course with private consumption and the service industry expanding it the second quarter, manufacturing and exports remained in the doldrums.

Analysts pointed out that weak exports will likely hold back the economy from reaching 2.7 percent growth.

“The GDP growth was better than what was expected,” said Jeong Yong-taek, a KTB Securities analyst. “But the [economic growth] flow continues to stay its course rather than entering a significant recovery, and it is unlikely that the situation will break free from the current course in the second half.”

Most significant, Jeong said, is exports, which have been in gridlock since 2011.

“July export growth [scheduled to be announced later this week] will likely show a sharper increase,” the analyst said. “But this growth will not be an indication that the export market has recovered.”

He said the improvement will likely be from the additional day this month than on the same month a year ago. China, Korea’s largest export market, continues to see a slowing of its economy, which cooled to 7.5 percent in the second quarter to meet reduced market expectations. Furthermore, IT exports, the biggest contributor to Korea’s export growth in the first half, are expected to struggle in the second half as demand for the latest smartphones - such as Samsung Electronics’ Galaxy S4 released earlier this year - will likely ease.

“Exports and imports will likely remain at their current level in the second half,” the analyst said. “The fact that exports are unlikely to regain momentum [in the second half] shows the need for a stimulus is greater than ever.”

In the survey, manufacturers continue to see sluggish domestic demand and economic uncertainties as their biggest challenges.