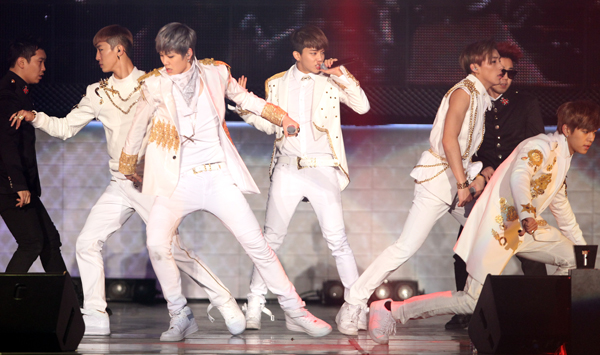 Boy group B.A.P announced its Aug. 6 comeback and released the cover of its third mini-album and the names of the songs it contains, according to its agency, TS Entertainment, yesterday. The group had spent most of its time overseas for tours in recent months.
The mini-album titled “Bad Man” will have six songs, including “Coffee Shop” and “Hurricane.”
“The new album is filled with the parts the group has not been able to show,” said the agency.
“Through it, the group will prove themselves as professional musicians by showing the diverse music genres they can sing and how they can present a great performance.”
The group will release all the songs on Aug. 6 through major local music providers.
To reconnect with local fans, the group plans to have a concert, “B.A.P Live On Earth Seoul—Wanted,” for two days starting Aug. 17 at Seoul Olympic Park in Songpa, southern Seoul.