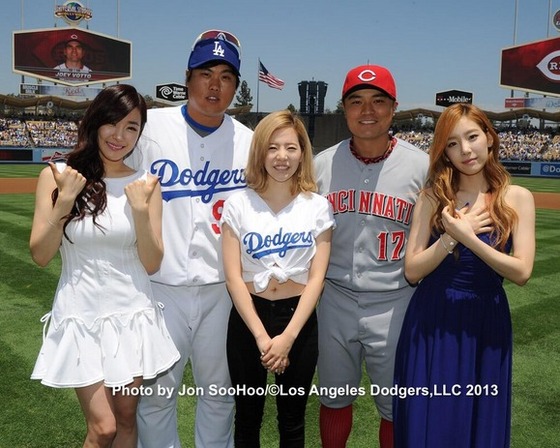 Members of Girls’ Generation visited Los Angeles to cheer on two Korean baseball players having a match against one another with their respected Major League teams on Sunday.

Korea’s Ryu Hyun-jin from the LA Dodgers played against Choo Shin-soo of the Cincinnati Reds in Dodger Stadium in California, and Taeyeon, Tiffany, and Sunny visited the stadium to cheer for the players.
Prior to the game’s start, Tiffany sung the U.S. national anthem, while Taeyeon sung the Korean one. Sunny threw the ceremonial first pitch.

Other Korean celebrities came out to the game to support the two players, who are working in the U.S.

Singer Psy and actor Song Seung-hun of the MBC drama “When A Man Loves” were caught watching the game by local broadcasters’ cameras.
LA Dodgers beat the Cincinnati Reds four to one.