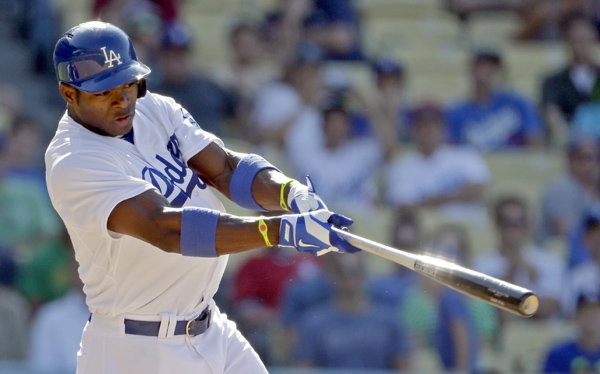 Los Angeles Dodgers rookie Yasiel Puig has 10 home runs and 23 RBI in 48 major-league games. His homer with two out in the 11th inning gave the Dodgers a 1-0 victory over the Cincinnati Reds at Dodger Stadium on Sunday. [AP/NEWSIS]

LOS ANGELES - Yasiel Puig does everything with a touch of panache, including his game-ending home run trot.

The Los Angeles Dodgers’ excitable rookie homered with two outs in the 11th inning for a 1-0 victory over the Cincinnati Reds on Sunday. Puig circled the bases and slid into home plate, where teammates were waiting for him after his first career walk-off homer.

“Each player does what he can when he gets to the plate. Some people jump, some people slide, some people run,” Puig said through a translator. “I have a previous teammate in Cuba that jumped and hurt his ankle. So I decided to slide.”

Puig drove an 0-1 pitch deep into the left-field pavilion against rookie Curtis Partch (0-1) for his 10th homer and 23rd RBI in 48 big league games. It salvaged an otherwise frustrating afternoon for the Dodgers, who were held to one hit by Tony Cingrani through the first seven innings.

“It wasn’t a terrible pitch,” Reds catcher Devin Mesoraco said. “I think, more than anything, it just had a little bit of elevation. In that situation, guys are trying to hit home runs, and Puig was able to get it in the air. As much as he’s chased pitches against us this series, I wanted it to be a ball.”

The NL West leaders, who took three of four from the Reds, won for the 26th time in 32 games and extended their lead to two and one-half games over Arizona. They were a season-worst 12 games under .500 and nine and one-half games out of first place on June 21.

“I don’t know anything about destiny, but we’re just finding a way to win,” League said. “We have the feeling even before the game starts that we’re going to win, and whoever’s sitting in the other dugout is going to lose. We’ve got a good thing going and we’re just going to keep it rolling. Puig’s contributed a lot, but it’s not only him. The best part of this is that it’s a different guy every day, and we’re not counting on one person.”