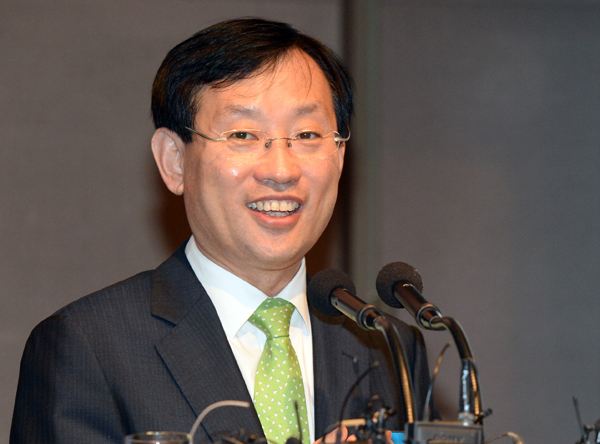 In a gesture to yield to mounting criticism of its near-monopolistic status and activities in the Internet ecosystem, NHN, operator of Korea’s top portal site and search engine Naver, yesterday came up with measures for mutual growth with its smaller and weaker business partners.

“For effective mutual growth with content providers,” Naver will form a “Naver service mutual growth body” with partners in August, said Kim Sang-hun, chief executive of NHN, at a press conference yesterday morning at the Press Center in central Seoul. As an initial step, the company will establish a “cartoon development committee” to globalize Webtoon, a word combining Web and cartoon. Naver accepts contributions from dozens of cartoonists and runs over 45,000 new Webtoons per month.

Kim also said NHN would form a 100 billion won ($90 million) fund, earmarking half to support start-ups and the other half for cultural content. For start-ups, the company would revitalize the ecosystem by becoming an angel investor and start-up incubator for those with innovative ideas. It would also provide systematic assistance to content providers by using Line, a global mobile messenger with more than 200 million users, as a platform.

Naver has been for copying the ideas and services of start-ups and small firms and stifling the content ecosystem by taking advantage of its dominant 75 percent share of the Internet portal market.

It has also been under fire for buying content including novels and cartoons at cheaper costs and profiting from immense traffic resulting from circulating the content, including advertising revenues.

Its influence has grown ever larger in recent years. It not only directly launched a search-engine advertising business instead of hiring a smaller company, but also spun off online advertising sales and marketing departments to establish a subsidiary called NHN Business Platform (NBP). Through this company, NHN began running an information site called “Naver Real Estate” and the price-comparison site “Knowledge Shopping.”

The Fair Trade Commission in May instigated an investigation of NHN’s business practices, pledging to strictly prohibit Naver from appropriating technologies or business models from smaller companies.

Lawmakers have also embarked on a procedure to prevent Naver from perpetuating illegal business practices.

One measure being considered is applying the system of limiting the business of market dominators to the search engine sector. In the mobile communication sector, for example, a company like SK Telecom with 50 percent or more market share is subject to a variety of restrictions.

“We have achieved immense growth in the meantime, but now the time has come for us to look for a way to go forward together,” said Kim at the conference. “It is our fault not to have realized it sooner.”

Despite the series of rosy promises, potential beneficiaries of the measures - Internet firms and start-ups - reacted coolly.

“What start-ups really want [from NHN] is not financial support, but a chance for a fair competition,” said a head of a local start-up who asked not to be named. “Even if start-ups receive funding from NHN, they can’t survive if NHN jumps into the same business sector.”

Some doubt NHN will actually proceed with the announced plans. It launched an “Internet mutual growth body” in 2010 by joining hands with other portal sites and mobile service providers, but its activities soon waned.

Kim Yong-tae, a lawmaker with the ruling Saenuri Party, said he won’t stop efforts to legislate bills to regulate Naver. “The measures do not touch the core issues,” he said. “Given that a portal like Naver can be viewed as public goods, we would limit actions that abuse its market dominance.”