Korea’s major builders’ second-quarter performance shows they are still struggling, although some companies have shown signs of promise.

The construction affiliate of Hyundai Motor Group was the only top five company to see an increase in operating profit and net profit. 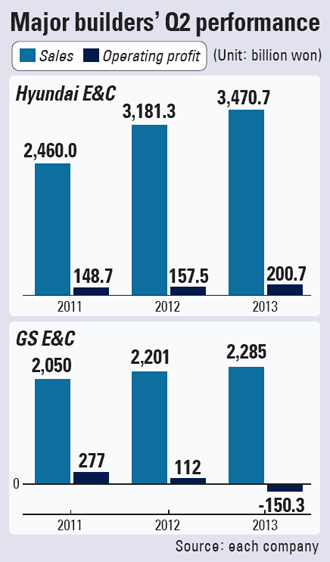 The company’s overall second-quarter performance showed operating profit of 99.3 billion won, down 28 percent from a year ago, and net profit of 116 billion won, a 56.1 percent drop.

“Samsung C&T’s revenue growth is assured by overseas orders, but the problem is whether it can make profits with those projects,” said Park Joong-sun, an analyst at Kiwoom Securities.

GS E&C and Samsung Engineering again reported losses in the second quarter, but analysts said they weren’t as shocking as in the previous quarter.

Since the shocking first quarter losses, the company has been receiving special inspection from Samsung Group regarding the overseas business and financial stability. Samsung Engineering said the second quarter performance also reflected the potential risk of overseas projects.

“The second-quarter performance [of construction firms] can be summarized as relief from shock,” Lee Kyung-ja, an analyst at Korea Investment & Securities, said in her report. “While builders have coped with malignant projects, they have lessened the losses and either met with the market expectation or performed slightly below.”