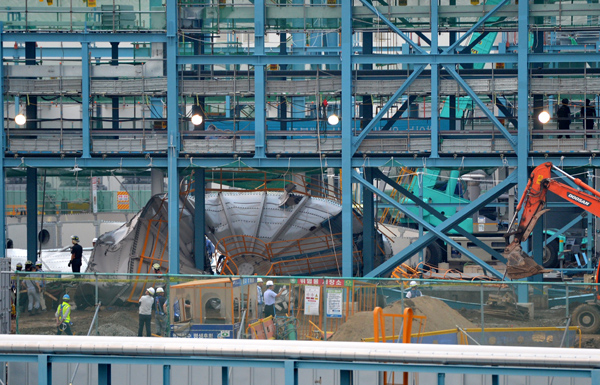 A massive water tank burst during a stress test at a construction site in Ulsan on Friday, killing three workers and injuring 12. The 1,300-ton tank was being filled with water to detect cracks, but it ruptured at the 1,000 ton mark, firing debris at nearby workers as the supporting structure collapsed.

The accident happened at a polysilicon production plant being built for SMP, a joint venture between Samsung Fine Chemicals and Missouri-based MEMC, at 5:31 p.m. Samsung Engineering, an affiliate of Samsung Group, is in charge of constructing the plant.

One of the three deceased workers was a 21-year-old college student surnamed Roh, who was working on a part-time contract during the school break. Choi Man-sik, 50, and another worker identified only as Seo, 45, also died. One of the 12 injured is in critical condition, according to the police.

Hundreds of broken 12-milimeter bolts that had been used to seal parts of the tank were found in the debris.

“We are examining bolts collected from the parts supplier that provided them for use on the burst water tank, to see if they are defective,” the Ulsan office of the Ministry of Employment and Labor said yesterday.

The Ulsan Nambu Police Precinct sent some bolts to the National Forensic Service for examination.

Seven of the 12 injured were reportedly on break in a site cafeteria when they were swept away by water that came gushing from the erupted tank, sustaining minor injuries.

Park Ki-seok, president of Samsung Engineering, issued an apology on Saturday. “We will fully cooperate with the authorities’ investigation and make the probe public and transparent in order to leave no remaining doubts.”