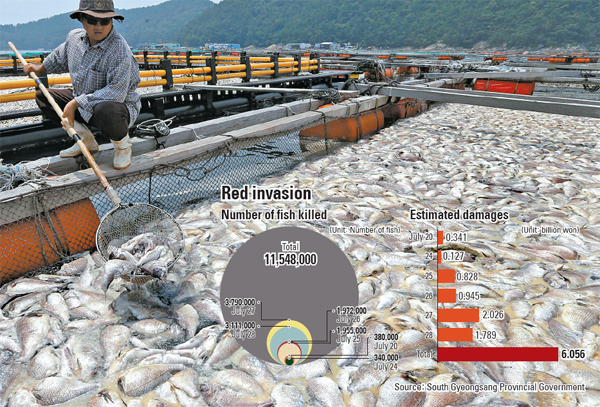 Fisherman Kim Yeon-bok, 58, went down to check his jwichi (tilefish or leatherfish) farm last week off Tongyeong, South Gyeongsang, and found thousands of his fish floating on the sea or washed up on the beach.

They were killed by a toxic red tide that has engulfed a large swath of the southern coast.

The number of fish killed this year along the southern coast is 11 million, according to the South Gyeongsang Provincial Government yesterday, generating 6.05 billion won ($5.45 million) in losses.

“The catch has been down this year,” Kim said, “So I looked forward to selling 250,000 jwichi. But 90 percent of them have been killed by the red tide.”

The fisherman estimated his loss at over 500 million won. There were so many dead fish, Kim said it would take two to three days to clear them away.

Kim is one of hundreds of farmers suffering from the red tide, caused by massive algae blooms exuding chemicals harmful to marine animals. They are not good for humans to inhale either.

The algae blooms turned the sea a reddish brown color a few days ago.

“My fish farm was totally ruined by the red tide,” said Park Soon-bok, 59, who raises chamdom (red sea bream) and jwichi in the southern waters off Tongyeong.

“It is really daunting to deploy cranes to move hundreds of thousands of dead fish from the sea into the land,” he said.

In Tongyeong City, one of the most heavily-affected areas, 42 fish farms have lost 80 to 90 percent of their fish.

The government is considering offering financial assistance to the affected areas in the South Gyeongsang regions.

Fish farms along the coast off Yeosu and Goheung, South Jeolla have been put on a red tide alert.

“I suffered a lot last year when the red tide killed a huge number of doldom [parrot fish],” said a 57-year-old fish farmer in Yeosu.

This year’s red tide is expected to be more severe than last year’s, which was blamed on sweltering heat, although the exact cause was never conclusively determined.

Prior to last year, red tides affected seas off of South Jeolla, where such phenomena were first detected. Last year and this year, the waters off South Gyeongsang were first affected.

“Farmers grow really frustrated because we have trouble using red clay to contain the red tide effects,” said the fisherman, “due to the South Jeolla governor’s order not to use it.”

Governor Park Joon-young banned the use of red clay to combat the tide, citing the potential of hurting other marine animals.

He also cast doubt on its effectiveness earlier this month, but the Ministry of Oceans and Fisheries countered the governor’s claim.

Also affected is the eastern sea, prompting the National Fisheries Research and Development Institute to issue a warning for the region for the first time in six years.

The fishery institute upgraded a warning for Yeosu and Goheung, South Jeolla as well as the south coast last week.

Concerns are rising of a repeat of the red-tide nightmare of 2003, which resulted in 21.5 billion won in losses.

“The wind shifting to the south will pose a further threat and there are no signs of heavy rain or thunderstorms in the near future, which can limit the effect of red tide,” said Lee Chang-kyu from the National Fisheries Research and Development Institute.