Exhibition paints new picture of life on the line

Exhibition paints new picture of life on the line

BAEKRYEONG ISLAND, Incheon, CHEORWON, Gangwon - For many, it might be hard to imagine the land near the artificial line that divides the two Koreas as anything other than a military border.

Perhaps that’s all it is to the soldiers who stand guard there, but to nearby residents, it’s just the place where they live.

For artists, it’s a land full of history that serves as a source of inspiration. To counter stereotypical images of the front line, local and international artists gathered to show the charms of Baekryeong Island, South Korea’s northernmost island, and Cheorwon in Gangwon, which borders the Demilitarized Zone (DMZ), which stretches across 248 kilometers between the South and the North.

“While many Koreans bear sedated sentiment over the tension between the North and South after experiencing losses of their sons in the past years due to the attack from the North, foreign artists take a different point of view and are more free to use metaphors or imagination to project the broken history,” said freelance curator Ryu Seong-hwan, who directed the installment of artworks on Baekryeong island. 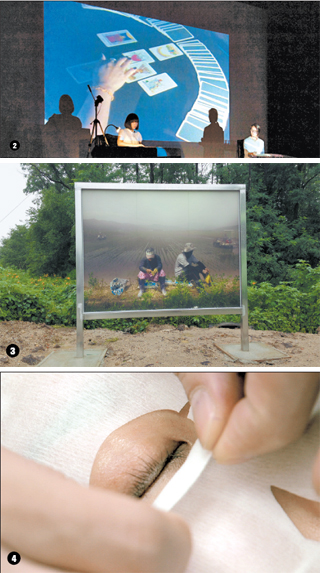 2. Irish artist Jesse Jones arranges an event in which performers read tarot cards and ask questions about the tension between the Koreas. 3. Artist Yun Su-yeon displays a photo of Cheorwon residents wearing clothes designed with prints inspired by places near the DMZ. 4. Fahrettin Orenli shows an incision on a human face during plastic surgery to make a comparison with the artificial border between North and South Korea. Provided by Artsonje Center, JoongAng Ilbo

Two ongoing exhibitions in Cheorwon and Baekryeong islands are scattered across the town so that visitors can see the works inspired by the local scene and also get a firsthand experience of the atmosphere. Artworks are displayed in war shelters, ruins of old buildings and a train station that is no longer in use.

By walking or driving from one exhibition to another, the two places will be reborn in visitors’ imaginations as the 60th anniversary of the armistice agreement ending the 1950-53 Korean War took place last weekend.

A message of hope

The exhibition, “Interview of 525,600 Hours of Baekryeong Island,” which opened last week, shows the experiences of families that have been separated by the war and delivers a message of hope.

More than 60 artists have created about 150 artworks inspired by the border that stops South Koreans from travelling to the North.

The island, which is four to five hours away from Incheon by ferry and near the Northern Limit Line (which serves as the de facto Western maritime border), has become a symbolic place to show the passage of time since the armistice agreement.

Although many island residents were forced to stay in the South after they fled from their hometown in Hwanghae province in the North during the war, they have hopes of going back home.

“I can see my hometown from here when the weather permits,” island resident Ha Young-sook told the JoongAng Ilbo, an affiliated of the Korea JoongAng Daily. Her hometown, Jangyeon, in Hwanghae province, is only 17 kilometers (10.5 miles) away. 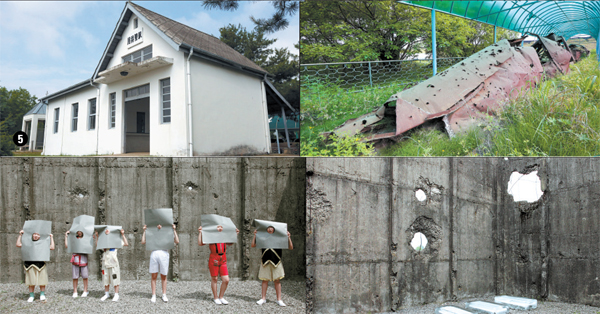 5. The Woljeongli station, left, is home to a rustic train and photos of children performing in a ice shed in Cheorwon that was bombed during the 1950-53 Korean War. Provided by Artsonje Center, JoongAng Ilbo

“I just sigh when I think I will die without ever going back,” she said.

As part of the exhibition, Ha helped place cloth roses onto the wire fences.

“The artist had hope that the roses can be the starting point to overcome the tense situation between the North and the South as she installed this work inspired by a gathering in Hungary in a bid to support the reunification of Germany,” said Lee Young-ri, curator of the exhibition.

The artist involved local residents, especially young students, to teach them that any type of martial attack should not happen again.

“A concept of peace is very different to the generation that has not had direct experience of a war,” said freelance curator Ryu, who directed the installment of many of the artworks on the island.

1. Artist Lee In presents a collage of images that project the death of soldiers during the North’s attack on Yeonpyeong Island in a war shelter in Baekryeong Island. 2. Artist Ham Kyung-ah shows embroidery she designed, which was made by North Korean professionals. Provided by Incheon Art Platform

The concept of peace can vary from one person to another. For example, Ryu said high school seniors fear the college entrance exam more than a nuclear bomb or the leader of North Korea, “so that is why we tried to involve as many youngsters who reside on the island.”

To some artists, the island is a pinnacle of romance. Jeong Ki-hoon piled up rocks found near the water as if each rock carries the romantic feelings that residents have for North Korea, but which have not been reciprocated.

“There are so many social issues artists can address in their works so we try not to use certain materials solely to make a controversial issue without putting any sincerity in them,” said artist Jeong Ki-hoon.

“Many artists have tried to be cautious about that because, no matter how careful we are, there is a chance that they will only use others’ pain as just the object of the artworks,” he said, adding that there are so many exhibitions of artworks to commemorate the 60th anniversary of the armistice agreement.

“That’s why I think I have chosen to take a more indirect route to talk about the North and the South without showing any straightforward ideas.”

Another artist, Ham Kyung-ah, chose a bolder way to communicate with the residents of the North. She used a third party to send her design of needlework across the border and professionals there completed the embroidery named “Bang Ga Bang Ga.”

The word, which means “hi” in Korean, is widely used on the Internet among youngsters to greet one another.

“Maybe North Koreans would pick this word up and say it to greet one another, and it can be the new and popular slang among the young generation as it spreads among people who embroidered this work,” said Ham.

While the exhibition is being held to attract more people to the island that is often mistaken as a dangerous place, it will move to Incheon on Aug. 14 so that more people can view the artworks and real images of Baekryeong.

Paul Kajander, a Canadian artist, invited children to present a performance in an ice storage shed that was built during the Japanese colonial rule before the war, but destroyed by bombs during the war.

“I wanted to work with children because the area occupied with the DMZ concerns militarism or ideological conflict, and this side of trauma from the war is something that I have no direct contact with, similar to the children that have grown up in generations that is subsequent to the war,” said Kajander.

“So it was a way of having them give voice to questions on military installations around the area in the absence of direct experience.”

However, the performance is no longer available for the visitors coming to Cheorwon, Gangwon.

Kajander chose to show the photos and recorded children’s sounds in a Woljeongli station that houses a rustic steel train facing the North.

“Real DMZ Project” organizer Artsonje Center invited more foreigners to contribute their view of the end of the Korean War, while groups in Incheon gathered local artists to Baekryeong.

Along with Kajander, Irish artist Jessie Jones also took part in collecting questions people have over the future of North and South Korea.

In the Iron Triangle Tourist Office, she organized an event in which performers read tarot cards with the questions taken from the audiences regarding the separated nation.

Fahrettin Orenli, a Turkish artist had a different approach. To him, Korea is a country that has experienced rapid social change and a total transformation of its economy in a short period since the end of the war 60 years ago.

He wanted to show that the artificial line that divides the two Koreas is similar to an incision made on human skin during plastic surgery.

“The cut referred to in the title points not only towards the invisible line that dissects a convention table in Panmunjeom, but also the lines associated with plastic surgery, suggestive of the expectations around attractiveness as a sure-fire strategy for success within a competitive society,” said the project organizer, quoting the artist.

“The artist sees the modernization of Korea as being as unnatural as surgically modified faces, and he states in this project that the relationship between the North and the South is one that lacks natural qualities.”

While the Artsonje Center focuses on exploring the meaning left in the South in Cheorwon until Sept. 22, it will also start presenting another exhibition in its gallery in central Seoul of works done by artists who have been to the North starting Aug. 22.