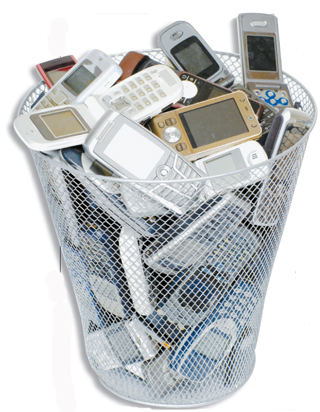 The most common first three digits for mobile phone numbers are 010, but most people have probably come across unfamiliar numbers, too - 011, 016, 017, 018 and 019. They are the legacy of the old 2G era and one third of them will be transferred to 010 starting next year.

The Korea Communications Commission (KCC), the state-run watchdog, was freed from a major stumbling block to push ahead with the plan it unveiled in 2010 to consolidate the numbers to 010 after the Constitutional Court of Korea last week ruled against individuals opposing the government measure.

Months after the top telecom regulator announced the plan three years ago, 1,681 users of 011, 016, 017, 018 and 019 filed a constitutional appeal, claiming the plan to consolidate the first three digits for mobile phones to 010 “violates the constitutional right of pursuing happiness and deciding one’s own phone number.”

But the Constitutional Court ruled last Thursday in favor of the KCC, dismissing the appeal.

“The figures constituting mobile phone numbers are irrelevant to human dignity,” said the court in the ruling, “nor do they restrict the personal information decision rights and property rights of individuals.” The court added it acknowledged the necessity for the KCC to force users to migrate to 010 to enhance convenience.

Starting in 2004, the top telecom regulator prohibited mobile service providers from offering three-digit numbers other than 010 when people open a new phone account. The measure was aimed at simplifying the lives of mobile phone users. Users of 010 only need to press the latter eight digits to call each other. The KCC also banned those users from migrating to the five other numbers. 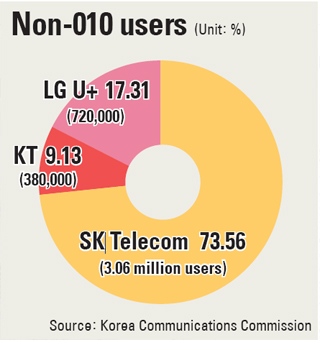 The numbers will automatically change to 010 at the beginning of next year, but those receiving phone calls will be able to see the users’ original numbers on caller ID for three years - for free.

The rule would not apply to 2.72 million non-010 users on the 2G network, although speculation among industry insiders is high that even they will be forced into the consolidation plan in five years. SK Telecom users make up the majority at 2.12 million and LG U+ at 600,000, whereas KT has none because it no longer operates the old network.

The lengthy period that allowed users to change their numbers has dragged up the portion of 010 users to 95 percent of mobile phone subscribers thus far. As of the end of June, there were 4.16 million non-010 users in Korea, with those subscribing to 3G or 4G long-term evolution (LTE) networks at 1.44 million.

The 017 numbers were once identified with “power” because the Kim Dae-jung administration, when distributing mobile phones to Blue House employees in 1998, chose 017 among the five options as Shinsegi Telecom won a competitive bidding. The Blue House set up an internal network to make it possible for the users to call each other by pressing the last four digits just like ordinary companies use extensions.

Earlier in February the entire Blue House staff had their mobile phone numbers changed to 010 from 017. But they continue using feature phones only supporting the 2G network for security’s sake, because the old network is better at blocking wiretapping attempts.