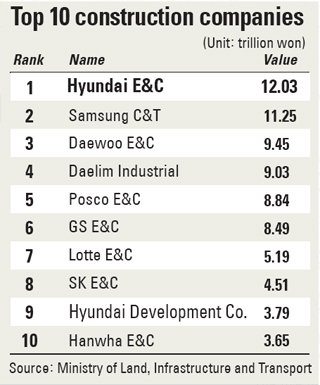 Hyundai Engineering and Construction has topped the Ministry of Land, Infrastructure and Transport’s construction capability evaluation for a fifth consecutive year, the ministry reported yesterday.

According to ministry data, the affiliate of Hyundai Motor Group was the No. 1 builder in Korea with its construction capability valued at 12.03 trillion won ($10.8 billion).

The construction capability evaluation measures companies’ construction contracts for the year, business management with financial conditions, technical levels and brand credibility. The government, along with the Construction Association of Korea (CAK), evaluated 10,218 companies this year.

Hyundai E&C saw its evaluation for business management decline slightly from last year, but maintained its top ranking in contracts, technical levels and brand credibility, according to CAK.

Samsung C&T was again the runner up at 11.25 trillion won, with the construction arm of Samsung Group increasing its capability by 1.15 trillion won from the previous year.

Daewoo E&C was third at 9.45 trillion won but was No. 1 in residential construction.

Daelim Industrial, which was No. 6 on last year’s list, climbed up to fourth place for the first time since 2005 as GS E&C slid from fourth to sixth. Posco E&C remained fifth and Lotte E&C seventh.

Hanwha E&C, which placed11th for the past three years, entered the Top 10 list at 3.65 trillion won, supplanting Doosan Heavy Industries, which fell to 12th on declining net profit.

By sector, Hyundai E&C was the No.1 in civil engineering and Samsung C&T was top in building construction. For industrial and environmental facilities, Samsung Engineering remained first at more than 8 trillion won. Hyundai Development Company was the top player in landscaping with 63 billion won.

The construction association cited the rise of midsize builders under conglomerates. Samsung Engineering jumped to 15th, up four places from a year ago, while Samsung Everland, which runs the nation’s biggest amusement park, advanced 12 places to 28th.

However, midsize builders in debt workout programs or court receivership declined. Byucksan Engineering slipped to No. 35 and Namkwang E&C fell to No. 42, both seven steps lower than the previous year.