Giving back to the countries that helped during the war

Giving back to the countries that helped during the war 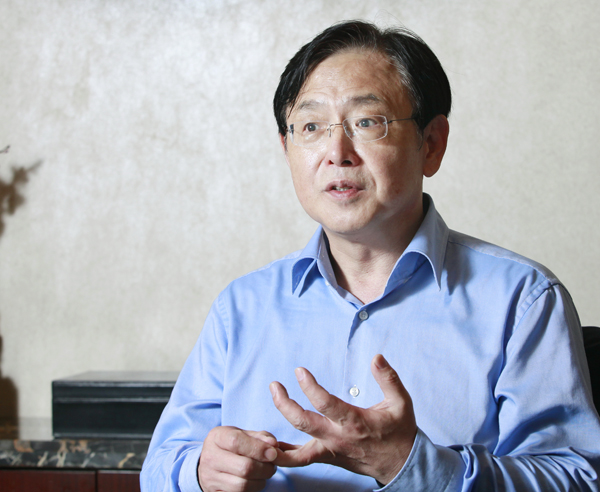 Korea should “remember those countries that helped us” during the Korean War, says Kim Young-mok, the new head of the Korea International Cooperation Agency. Many of them are developing nations, and Korea can now afford to show its appreciation.

Kim sat down for an interview with the Korea JoongAng Daily ahead of the 60th anniversary of the armistice agreement that ended the Korean War. Kim, 60, has previously served as consul general in New York and ambassador to Iran.

Koica was founded in 1991 as the government agency responsible for Korea’s aid programs for developing countries. Over the course of six decades, Korea is the only country to have transformed from an impoverished aid recipient to a member of the OECD Development Assistance Committee, which it joined in 2010.

Kim, who advised President Park Geun-hye on foreign affairs and security during her election campaign, said his experience in diplomacy and running infrastructure projects, as well as his many posts abroad, will help him lead Koica.

The career diplomat entered the foreign service in 1977 and has served as vice secretary-general at the Korean Peninsula Energy Development Organization and as the deputy director-general for North American affairs.

Q. How has Korea’s role changed as we emerged as a member of the OECD Development Assistance Committee?

A. Many other developing countries helped us during the war. Among those are Thailand, Turkey, Ethiopia, the Philippines and Colombia. Turkey and Thailand are no longer recipient countries, but regardless of their ODA (official development assistance) status, we would like to help more and ease their burden, because they sacrificed greatly during our war.

That’s why I am trying to develop our cooperation with the Thailand International Development Cooperation Agency and helping Turkey, who has the huge burden of taking care of Syrian refugees.

In the Philippines, Colombia and Ethiopia, we were helping villagers whose ancestors participated in the Korean War. In the Philippines, we were making hospitals where people can get medical aid, and also in Colombia, we are in process of specializing in taking care of wounded veterans.

As Koica’s new president, what is your vision for the future?

Korea has been developing its capability to share its experience and know-how with other countries but the actual amount of contributions has been very modest. We are trying to raise the total amount of ODA from the current 0.16 percent of the GDP to 0.25 percent. We would like to make Koica really one of the leading international development assistant organizations because Koica’s experience is smaller compared to other agencies.

Second, what I foresee is that we have entered into a new era of public diplomacy where private citizens become diplomats and everyone can act as a diplomat and represent the country. So professional workers, consultants and volunteers can become diplomats in a sense and are carrying Korea’s value and friendship and sharing heart to other countries.

You have just returned from a two-week Asia trip to countries including Vietnam, Laos and Thailand.

The three countries were equally memorable and meaningful to me. Our relationship with Vietnam has grown into a strategic partnership. Vietnam is one of the biggest recipient beneficiary countries of Korea’s donations. The Vietnamese people and government were highly appreciative of our contributions. We were doing medical projects, rural development projects and giving occasional training. We are now in the process of giving consultations on bringing Korea’s justice system to Vietnam. Our system will not be identical to Vietnam, but Vietnam is undergoing a fundamental reform in their justice system, so they are learning from us.

Second, we are also giving our knowledge on science and technology, and creating a Korea Institute of Science and Technology-like institute for Vietnam.

How about Laos and Thailand?

Laos is a little bit more isolated compared to Vietnam and Thailand. Laos is more of a backwater than Mekong Delta area. Compared to Vietnam, Laos is a small country, so they were highly expecting Korea’s help in every field of national strategy, particularly an expansion of the Saemauel Movement, rural development, irrigation using hydropower water and expanding our medical program. In Thailand, we are trying to formulate a triangular cooperation between Koica and the Thailand International Development Cooperation Agency.


South Korea has raised concerns regarding North Korean defectors who were repatriated back to Pyongyang while passing through Laos.

It’s a sensitive issue, and I did not touch the issue when I was in Laos. But if we do good things and win the heart of the Laotian people. I think Laos can be a real friend to South Korea.

Koica has numerous ongoing projects, both short- and long-term. What are some key efforts?

First, we’d like to help recipient countries achieve the UN Millennium Development Goals. This involves medical education, human rights, sexual equality and governance. Second, we’d like to help them through Korea’s Saemaeul [development project] because Saemaeul is a strategy aimed at both rural and social development. The third one is to help them in industrial capacity and infrastructure as Koica’s donations are small. But we can use this to unlock the initial hurdle for going into real projects.

The Saemaeul Movement, also known as the New Village Movement launched in 1970 to modernize the rural economy, has been benchmarked by many countries. How is Koica going to advance the strategy, as recommended by UN Secretary General Ban Ki-moon?

First, you have to expand cooperation with international organizations, such as the United Nations Development Program.

Second, we need to increase our internal capabilities, project-to-project: our know-how, our coordination, our organizations, and our technologies, so that recipient countries can easily and quickly benefit from this. This is what I call a smart platform for Saemaeul because Saemaeul involves spirit and mentality, organization, and how to take advantage of small appropriate technologies in improving revenues, improving the environment in those villages.

Third is to help them get access to electricity, ICT (Internet and communication technology), media, culture and even universal values such as respect for children, women and how to develop women’s capabilities for social development. Those kinds of values we would like to include in the package of the Saemaueul platform.

Fourth, we must increase our capabilities to bring in foreigners and recipient country leaders, villagers, or managers who can really learn the core of the Saemaeul Movement.

You have served as consul general in New York and as ambassador to Iran. What sort of outlook does your experiences overseas bring to your perspective as the head of the nation’s top aid agency?

When I was in New York, I was able to meet many talented young people willing to join in the international works and global agenda of Korea. I have seen rising interest and explosive energy among young people who would like to be a part of the global movement, so I thought when I came back to Korea, we can take advantage of the talent, the energy, to make Korea more global, to make Korea loved by more countries. This is one philosophy that I have as head of Koica. Our government goal is to increase our international global capabilities and raise young people to go through Koica’s international education program and serve as Koica’s diplomats at every corner of the world.

You have a trip scheduled for Africa next month - what are your goals?

In Ethiopia, we have been doing a Korean village, a Saemuael promotion, so I would like to see with my own eyes what’s going on and what more we need. Leaders of Ethiopia, Uganda and Mozambique visited Korea, and we promised them we would check their needs and help them. Maybe that will include Saemaeul, plus agriculture, capability building and infrastructure building.