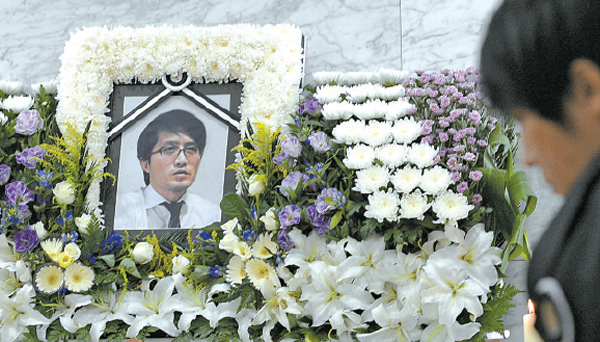 A mourner pays his respects at the funeral altar of self-proclaimed anti-feminist Sung Jae-gi at Yeouido St. Mary’s Hospital in Seoul yesterday. [NEWSIS]

At a memorial altar in Yeouido yesterday, somber-looking young men bowed their heads before a portrait of Sung Jae-gi, the self-proclaimed anti-feminist activist whose body was pulled from the Han River on Monday.

He had been missing for four days after leaping from the Mapo Bridge in a publicity stunt gone bad. He was trying to raise money for the men’s rights group he founded, Man of Korea, and had planned to swim to shore.

“I came here to pay my respects to Sung because he advocated for men’s rights when no one else would,” said a 28-year-old worker surnamed Kang at the memorial altar at Yeouido St. Mary’s Hospital. Kang was one of three dozen men seen at the funeral parlor yesterday afternoon.

“As a frequent visitor to the Web site for Sung’s group, I agreed with many gender issues he advocated, such as the reinstatement of the extra point system and the termination of a discriminatory policy against men when it comes to sex industry laws,” said Kang. Sung, 45, was calling for the revival of a system that rewards men who have completed their military service with special consideration in the recruitment process for government jobs. He was also demanding the government scrap an impending amendment to the special law on prostitution that would make men legally responsible if caught buying sex while letting the sex worker off.

Korea ranked 108 of 135 countries on the World Economic Forum’s Global Gender Gap Report in 2012, just above Kuwait and Nigeria and just behind the United Arab Emirates. Korea also has the widest pay gap between men and women in the Organization for Economic Cooperation and Development. A mere 1.9 percent of the executives at the nation’s 106 major firms are female, according to GMI Ratings.

Still, Sung persisted in his crusade, calling for the abolishment of the Ministry of Gender Equality and Family.

He has sparked public backlash in the past with controversial messages on Twitter, such as one that said Korea was in no position to demand an apology from Japan for forcing its women into sexual slavery during World War II. “Japan’s right-wing groups are not going to buy our claim when there are tens of thousands of Korean women in Japan ready to sell their bodies,” wrote Sung on Twitter last year.

Nonetheless, Sung had garnered something of a following.

“There are many civic groups calling for an improvement in women’s rights, but there’s no group doing the same thing for men. There should be at least one organization working for men’s rights. And Sung’s Man of Korea is just doing that,” said a 27-year-old funeral attendee surnamed Cho.

Man of Korea was in dire financial straits. In a post uploaded in May, the group stated it had received 19.5 million won ($17,511) in donations from March 2011 until May 2013, but had spent an overwhelming 246.7 million won over the same period.

Sung posted a plea to the Man of Korea site a day before his ill-fated leap. “With my life at stake, I hereby request the citizens give Man of Korea a last opportunity?.?.?.?I ask you to lend us 100 million won.”

After it was reported that Sung’s body had been found on Monday, the Web site of the gender equality ministry temporarily crashed, sparking speculation that the site might have been hacked. It was later revealed that excessive attempts to connect to the page caused the temporary shutdown.

“Though his decision to jump into the river was wrong, it should not overshadow the legitimacy of his positions on gender equality...He believed firmly that the competence of Korean females is so great that they don’t need government support through the gender equality ministry,” said Byun Hee-jae, a conservative online pundit who is leading the funeral services.

Sung will be buried on Aug.1 in Daegu.