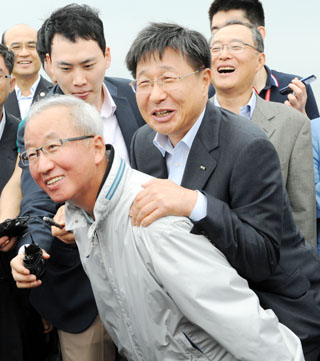 Hyun Oh-seok, deputy prime minister of economy, carries CEO Kim Jae-sin of OCI SE on his back yesterday to express his gratitude for the company’s investment in the Saemangeum-Gunsan Free Economic Zone in Gunsan, North Jeolla. [NEWSIS]

GUNSAN - Dark brown soil dredged from the Yellow Sea pour from a 10-kilometer (6.2-mile) pipe laid in the middle of roughly 162,000 square meters (40 acres) of reclaimed land known as the No. 2 District of the Saemangeum-Gunsan Free Economic Zone, in Gunsan, North Jeolla.

The soil is used as part of the Korean government’s Saemangeum Seawall Project to reclaim land for production plants and?R&D centers.

On the reclaimed area, OCI SE, a subsidiary of the Korea’s leading solar energy company OCI, plans to build a cogeneration power plant to provide affordable energy to future businesses in the Saemangeum-Gunsan FEZ. The plant is set to break ground in September, if it is approved by the Ministry of Environment.

“As the president once said, I would like to have the OCI SE CEO Kim Jae-sin ride on my back to express gratitude for making an investment here,” said Hyun Oh-seok, deputy prime minister for economy and finance minister. “The government will address difficulties hindering this project as soon as possible.” He credited the project for creating high-quality jobs, boosting the regional economy and enhancing the country’s growth potential.

Hyun and about 40 government officials visited the Saemangeum FEZ during a two-day field trip to check on progress of national FEZ projects.

The government has been pushing to establish eight FEZs, with eased regulation of businesses, across the country since 2003 in a bid to attract foreign direct investment. But most of them remain stalled due to lack of interest from the private sector.

Hyun decided to look around the area to assess the effects of his policies so far and suggest measures to boost investment and exports in the second half of the year.

“The government’s focus in the first half of the year was to create a fair market environment through the economic democratization initiative, but in the second half it will shift to boosting business investment,” Hyun said. “The government will come up with its third package of deregulatory measures to attract foreign capital soon.” 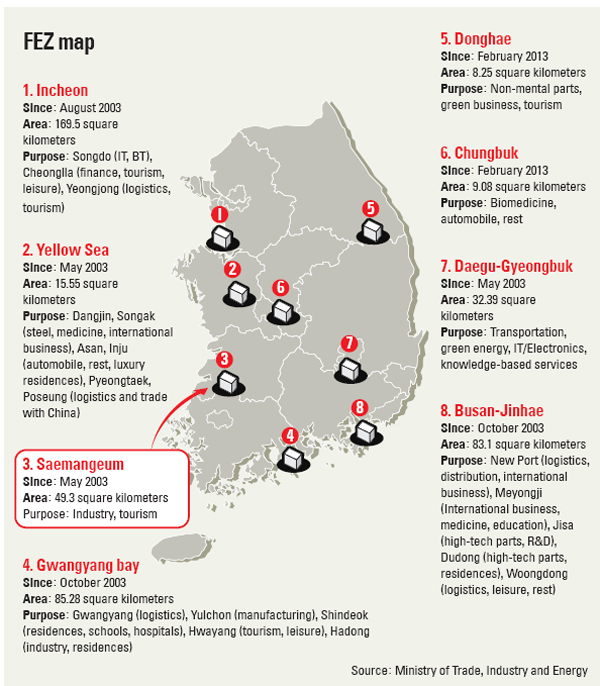 OCI SE’s cogeneration plant project is the best example of the kind of business investment the government hopes to see. The plant was included as a pending business project in need of deregulation in the government’s first investment promotion plan announced May 1.

The deputy prime minister called for swift action by related government agencies to accelerate the Saemangeum FEZ project, which has been delayed due to differences among agencies, opposition from environmentalists and government regulation.

The project started off as the world’s largest sea reclamation project to fill a 401-square-kilometer estuarine tidal flat in 1987. The site is an area two thirds that of Seoul, and 49.3 square kilometers has been allocated as the FEZ.

As part of the reclamation work, a 33.9-kilometer seawall, the longest in the world, was completed in 2010.

Saemangeum was chosen in 2008 to be a free economic zone. The first phase of the FEZ creation is scheduled to be completed by 2020 with a 22.2 trillion won investment from the government. The second phase is planned to be finished by 2040.

“Underperforming FEZ areas will be reduced to put the entire project on normal speed,” Hyun said. “The government will offer full support and make the Saemangeum FEZ a hub for the country’s exports to China,” he added.

Early this month, the Ministry of Trade, Industry and Energy decided to spur efforts to develop FEZs by injecting 82 trillion won by 2022.

The government first adopted the plan to create FEZs in 2003 and selected eight regions including Incheon, Busan and Jinhae to be transformed into free-regulation districts for both foreign and domestic businesses.

However, for the past decade, progress has been slow.

As of late last year, about $6.8 billion had been invested in the eight FEZs, with foreign investment accounting for 6 percent of the amount, according to the Industry Ministry. About 93 percent of companies that decided to enter the zones are local businesses, unlike the government’s goal of making 70 percent of entrants foreign ones.?

A total of 415 businesses have signed contracts with the Saemangeum-Gunsan FEZ Authority to move in, but only 16 of them are foreign.?