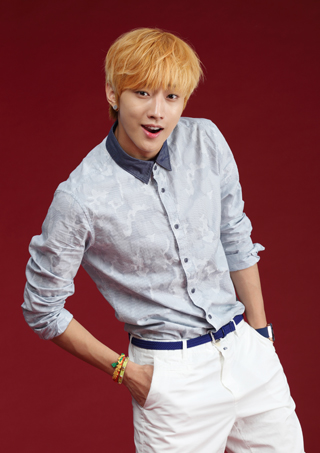 In just the two years since their debut, boy group B1A4 has gathered 160,000 fans in Korea, a testament to their singing and dancing prowess. But the group’s leader Jinyoung has further expanded his skills, recently showing his talents as an actor.

After playing a troublesome high school student who needed five years to graduate high school instead of the usual three on the tvN drama “She’s Wow,” Jinyoung said being an actor and a singer isn’t so different.

“There are many similarities, notably that both jobs deliver feelings,” said Jinyoung to Ilgan Sports, an affiliated of the Korea JoongAng Daily.

“It’s just different how they do it.”

Having just started filming a movie a week ago, Jinyoung sat down to talk more about building his acting career.

A. Prior to my debut, I was interested in the overall entertainment industry, including music, so I just grabbed the chance when I got it. But I think I came up short because I jumped in when I was not completely ready. Director Kim Cheol-gyu helped me a lot to get the character in the beginning, and toward the middle of filming he said I could try different things. I was happy he approved of me.

Are you normally adventurous?

I just like challenges. Among the B1A4 members, I’m the one who is usually the most confident. I feel like I can do anything once I get a chance to try.

Are you different from the character you played?

Completely the opposite. Before, I was worried, thinking, “How am I going to act like someone that is so different from me?” But the more I did it, I felt a catharsis.

What is the biggest difference between being a singer and an actor?

The way you act around a camera is different. When performing on stage we look at the camera, but I couldn’t do that when I was acting. As I’m used to looking at the lens since my debut two years ago, it was hard to change that.

What other plans do you have towards the end of this year?

I will be all over the place. I started filming “Suspicious Girl” at the end of July. Then the group B1A4 will have some concerts from August 7 to 11 in Seoul and then we’ll go to Japan for another tour. And our group has a new song coming out.