Where to get your daily bread

Where to get your daily bread

Instead of sweet and soft breads, those made with healthy ingredients are gaining popularity. [JoongAng Ilbo]

Sweet and soft breads still rule the bakery shelves in Korea, but that trend is steadily changing.

Pastry chef Shin Tae-hwa at JW Marriott Seoul Hotel is among those who has witnessed this change.

“Before 2008, we had leavened breads, but I threw all of them into a trash can at the end of the day because nobody bought them,” said Shin, who’s been working as a bakery chef for the past 32 years.

“Still, the best-selling item at Deli Shop (a bakery shop of JW Marriott Seoul) is breads with red bean paste, but sales of these leavened breads have gone up as more Koreans eat them for meals.

“Bakery product trends have changed a lot over the past years, indeed,” added Shin as he kneaded a lump of dough.

Looking at the changed palate of Koreans, Shin recently decided to increase the number of bread offerings made with healthy ingredients at the Deli Shop from two to eight. They range from plain breads to those made with cranberries, nuts and raisins.

In order to produce quality breads that are crisp outside and chewy inside, the hotel purchased a new oven in which the chef can bake the breads on stone shelves instead of oven pans.

Breads made with natural leavening agents are often called healthy breads in Korea because they don’t contain butter and sugar but have a higher amount of fiber and grains.

In addition, these breads are made with natural leavening agents using fruits, making them more digestible than ordinary breads.

“A majority of Koreans still prefer soft and sweet breads, but you should know they can’t be that soft without a higher amount of sugar and butter,” added Shin.

With more Koreans traveling or living overseas, they have increasingly been exposed to the charm of breads, which are a bit hard, but chewy and mild.

Other hotels are also producing more healthy options compared to the past.

However, individual chefs, who were trained in Europe, were the first ones to read the changed preferences of Korean customers. 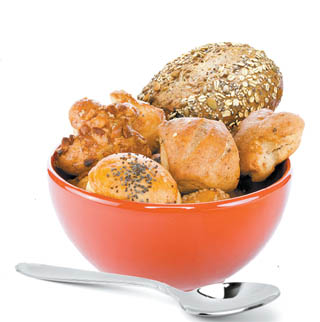 Here is a list of bakeries where you can find loaves of bread just out of the oven.

If you are new to these healthy breads, pastry chef Shin says you can enjoy them by dipping them into a mixture of olive oil and balsamic vinegar.

“Some spread butter onto these leavened breads, but it is not a good idea because you chose them to avoid butter and sugar for your health,” said Shin.

Another way of enjoying these breads is using them to make sandwiches. “The taste of your sandwich highly depends on what type of bread you use,” said Shin.

May Bell Bakery is probably one of the first few bakeries that started specializing in so-called healthy breads in Seoul. All the breads are sold out about 3 p.m., even before its official closing time, but it wasn’t easy for bakery chef Jeong Woong of May Bell to gain a footing in the beginning.

He first opened his bakery in Ilsan, Gyeonggi, nine years ago, but he was on the verge of bankruptcy.

“Some customers thought I was selling old breads because most leavened breads are hard. They even threatened me that they would call the police,” Jeong told the JoongAng Ilbo.

A friend of his, however, suggested that he move to Itaewon, where more foreigners live. He did so and his business gained momentum.

Some bakeries don’t specify how much rye and grains are used in each bread, but May Bell does. One rye bread that contains 85 percent rye powder is one of the bakery’s most popular sellers.

Bakersfield, located in Yeoksam-dong, southern Seoul, is a bakery cafe run by bakery chef Moon Heung-nam, who used to work for the bakery shop of the Westin Chosun Hotel for 18 years.

Chef Moon uses organic flour from France and Canada. Some breads without eggs and milk are labeled as vegan.

Assorted sandwiches and paninis are also available, along with sweet desserts such as choux, scones and tarts.

After 8 p.m., a 30 percent discount is given to those who buy healthy breads.

First opened in 1979 in Seongsan-dong, Mapo District, Richemont Bakery is one of the oldest bakeries in Seoul and all of the breads are produced under the control of bakery master Kwon Sang-beom.

The Ministry of Employment and Labor started granting the title of bakery master in 2000 and only nine people, including Kwon, have earned that title.

The bakery started to produce healthier options in the mid-2000s. Now, a whole section in the middle of the bakery is dedicated to about 20 types of breads, most of which are German breads such as Kaiser Semmel, Brotchen and Bauernbrot.

The bakery uses 100 percent organic flour and organic fertile eggs. Some breads are made with home-grown whole-wheat flour.

The best attribute of Richemont Bakery is its breakfast bread buffet, which is only available between 8 a.m. and 9:30 a.m. each day. You can eat an unlimited amount of five or six types of breads, along with coffee, milk, jam, butter, cheese and ham for 6,500 won ($5.60).

Located in Hannam-dong, central Seoul, Ach So! Lecker specializes in German breads. About 10 types of German breads from pretzel to assorted rye breads are available.

Of the many offerings, Brotchen is also served along with cream cheese, ham, cheese and salami.

The bakery is known as the place where you can taste real German breads in Seoul at reasonable prices. A small size of Brotchen starts at 1,000 won.