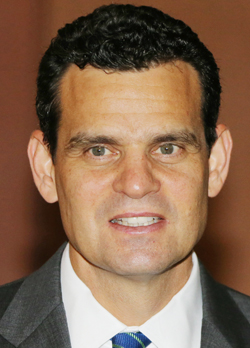 
The United States is interested in following the money of the Kim dynasty in North Korea, according to David Cohen, the U.S. Treasury’s sanctions chief.

“Whether we can take action or what action we will take, we will wait to see when we find the money,” he told a panel of five media groups, including the JoongAng Ilbo, at the U.S. Embassy in central Seoul on Tuesday.

The purpose of the sanctions on North Korea, said the U.S. undersecretary for terrorism and financial intelligence, is “to make it more difficult for North Korea to continue to develop its nuclear and ballistic program” and “to put pressure on the leadership of North Korea so that they have a greater incentive to change their course on the nuclear program.”

Cohen added that the U.S. will “continue to increase pressure on the North Korean government until it changes its course.”

Cohen, who visited Tokyo on Monday, spoke to First Vice Minister of Foreign Affairs Kim Kyou-hyun, Deputy Finance Minister Eun Sung-soo and Cho Tae-yong, Seoul’s top envoy to the six party talks, on Tuesday in Seoul. He continues on to Singapore and Malaysia for the rest of the week.

He said his visit was mainly to make sure Seoul was “synced up” on efforts to reduce the threat from the North’s nuclear program, including proliferation activities and continued development of its nuclear and ballistic capabilities, along with the threat posed by Iran’s nuclear program. Cohen said China is complying with U.S.-led sanctions for its own purposes.

In March, the U.S. Treasury slapped sanctions on the state-run Foreign Trade Bank, North Korea’s primary foreign exchange bank, for financing nuclear and missile proliferation activities following the North’s third nuclear test in February. The state-run Bank of China cut off business with the Foreign Trade Bank in May.

“What we have seen is Chinese banks taking steps to restrict Foreign Trade Bank’s activities in China,” he said. “China is acting out of its own perception of the risks that North Korea’s nuclear program poses to China and its citizens and its country,” he said. It wasn’t performing a “favor” for the United States.

Cohen also referred to the recent case of Panama seizing a North Korean vessel coming from Cuba that carried weapons buried under a cargo of sugar. “This action by the Panamanians to stop the vessel because it was carrying undeclared and illicit North Korean weapons is a good indication of enforcement of UN resolutions,” he said.

While there is still more work to do, Cohen said, “the ability of North Korea to access the international financial system to easily move money to pay for or to get paid for material that it’s either selling or purchasing for its program has been significantly impaired.”

He added that North Korea has been forced to use front companies, proxies or couriering cash, rather than making traditional financial transactions, a process which he called “cumbersome.”

“That makes it all the more difficult for North Korea to either sell the weapons it’s trying to sell or to purchase the material it needs to develop its nuclear and ballistic program.”

Regarding loopholes in the sanctions, he said, “We don’t have a complete seal over North Korea, that’s not what we’re aiming for.

“But we are trying to limit the ability of the elite in North Korea to live a comfortable life while the people of the North Korea suffer desperately under the regime.”